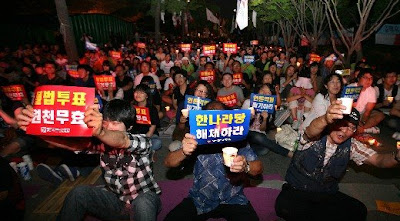 * Image source/ description: same as below

"Citizens participate in a demonstration to protest the passage of the ruling Grand National Party’s (GNP) Broadcasting Law revision bill and hold banners that read, “Annul the passage” “Disband the GNP” at Yeouido located in Seoul, July 23."

The Grand National Party’s (GNP) blitz-like passage of media legislation is expected to cause a major upheaval in the media market. The Korea Information Society Development Institute predicts that a new market of 1.56 trillion Won may be created as a result of the legislation that just passed. Meanwhile, many analysts are also predicting market distortions resulting from deeper competition for media companies’ survival as the battle over a small advertising market heats up.

The Korea Communications Commission appears set to select two new general television channel operators and a couple of other news channel operators by the end of this year. The broadcasting industry is estimating the amount of initial capital needed at around 200 to 300 billion Won. It is also estimated that an annual investment of more 100 billion Won will be needed to survive in the market. A KCC official says, “How newspaper companies or conglomerates establish consortiums will serve as an important selection criterion.”

Some analysts are predicting if large conglomerates invest in broadcasting, either as major stockholders or equity participants, the possibility increases that they will be moving advertising in the direction of channels they are investing in or aiming to manage. “Even now, large conglomerates account for 25 percent of the broadcast advertising market, and if the new general programming channel takes this, it will throw the whole broadcast advertising market into chaos,” predicted Chae Su-hyeon, a policy committee member with the People’s Coalition for Media Reform.

“If advertising revenue streams shift with the entry of new general programming and reporting channel operators, either the gross domestic product needs to increase or regulations need to be relaxed to encourage growth in the advertising market,” said Sung Ki-hyun, secretary general of the Korean Cable TV Association. However, Sung said, neither will be easy in the current situation. There is a strong possibility that a land grab will ultimately be taking place in the advertising market.

The government is also saying that a rise in the receiving fee for KBS would allow advertising that currently goes to KBS to go to other channels. The two KBS channels (KBS Channel 1 and KBS Channel 2) currently take in around 600 billion Won a year from advertising. However, there is a limit to this as well. “Given the current situation in broadcast advertising, we can accommodate around one more general programming network at best,” said Institute for Public Media Director Jo Jun-sang.

Han Ik-hee, a researcher with Hyundai Securities, warns, “An increase in the number of general programming providers would be a disaster for existing terrestrial broadcasting and cable providers.”

If advertising becomes concentrated in the new general programming and reporting channels, and KBS maintains itself as a public broadcasting network through a raise in its receiving fees, analysts are saying the standing of MBC will inevitably narrow considerably. Advertising revenues for MBC and the other two terrestrial broadcasters have fallen by nearly 100 billion Won a year since 2002. They suggest that if the advertising market is further diminished with the addition of general program channel operators, MBC will be under heavy pressure to privatize. According to an Institute for Public Media simulation, the entry of two new general programming networks and a new reporting network into the market would reduce existing ad revenues for terrestrial broadcasters by anywhere from 16.2 percent to 36.8 percent.

Other analysts are suggesting that the Chosun Ilbo, JoongAng Ilbo and Dong-A Ilbo may enter the broadcasting market and take away advertising revenue from metropolitan and local newspapers in addition to existing channel operators by providing discounts linking newspapers and broadcasting. According to an analysis of 2008 press management results conducted by the Korea Press Foundation, advertising accounts for 74.5 percent of newspaper revenues. Inevitably, the newspapers are going to be dealing a harsh blow to others in the newspaper and broadcast markets.


http://english.hani.co.kr/arti/english_edition/e_national/367406.html
DP fights to annul the Broadcasting Law amendment If DP can gather a broad public consensus, it may challenge the Broadcasting Law amendment in the ordinary session of the National Assembly in September Posted on : Jul.23,2009 11:53 KST
Posted by NO Base Stories of Korea at 1:20 PM