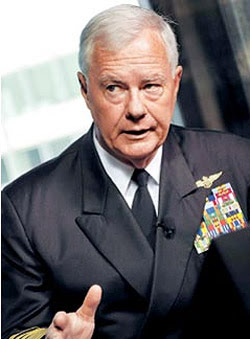 The U.S. "has plans" in the event of trouble in North Korea following the death of ailing leader Kim Jong-il, the commander of the U.S. Pacific Command, Adm. Timothy Keating, claimed Wednesday. "I can tell you that we have plans with the United States Forces Korea and others in place if the president tells us to execute those plans, in the event of some uncertain succession in the North," Keating told reporters at the U.S. Defense Department.

But he added, "I don't think it is axiomatic that the departure of Kim Jong-il means a national security crisis. We would hope it wouldn't. But we are going to be prepared if it does mean that."

The admiral declined to go into detail. "We are prepared to execute a wide range of options in concert with allies in South Korea and in discussions through [the Department of] State, which would have the lead, with countries in the region and internationally if necessary."

This was the first time the commander of U.S. forces on Korean Peninsula in case of a sudden change in North Korea, made public remarks about a contingency plan for Kim's death.

On July 15, Michael Nacht, Assistant Secretary of Defense for Global Security Affairs, said the department is "developing a scenario for the future of North Korea."

Michael O'Hanlon of the Brookings Institution, a think tank in Washington, in a report in June said in the event of North Korean regime collapse, South Korean forces can implement tasks to maintain peace and reconstruct the North, but that the U.S. forces need to advance into North Korea if its nuclear materials, a serious threat to U.S. national security, pose a problem. In that case, the U.S. must send a clear message to China including promising to withdraw from the North Korean territory as soon as possible, he added.
englishnews@chosun.com / Jul. 24, 2009 09:33 KST

Posted by NO Base Stories of Korea at 7:12 PM