Text Fwd: N. Korea indicates willingness to engage in bilateral talks with the U.S. at ARF 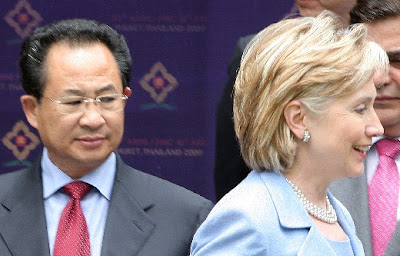 * Image source/ description: same as below

Hankyoreh
N. Korea indicates willingness to engage in bilateral talks with the U.S. at ARF:
However, N. Korea delegation denounces U.S.’s offer of a “comprehensive package” as “nonsense” and ARF urges N. Korea to return to six-party talks
Posted on : Jul.24,2009 12:29 KST

The North Korean delegation to the ASEAN Regional Forum (ARF) in Phuket, Thailand said the U.S.’s offer of a “comprehensive package” Thursday was “just a replay of the Bush administration’s policy of “complete, verifiable, irreversible dismantlement” (CVID) and dismissed it as “nonsense.”

Ri Hung-sik, director-general of the North Korean foreign ministry’s international organization bureau relayed these sentiments at a press conference at the Sheraton Hotel in Phuket. Ri stressed, however, that North Korea is not opposed to dialogue, which has led some observers to interpret his comments as hinting that under the right conditions, it would be willing to negotiate with the U.S. This is virtually the first time that North Korea has given such an indication that it would enter negotiations since its long-range rocket launch and second nuclear test. U.S. Secretary of State Hillary Rodham Clinton also indicated an intention to talk with North Korea and revealed slightly more details about the comprehensive package at a press conference Thursday.

Ri said the U.S. is offering a package in exchange for North Korea’s agreement to abandon its nuclear program, but the program exists as a response to the U.S.’s hostile policy towards North Korea. He stressed that North Korea could not talk with the U.S. while the latter carried a knife. He said North Korea would not trade in its sovereignty and security, or its life, while the U.S. deploys countless advanced weapons in South Korea. Ri emphasized that North Korea needed to defend itself as a small country. Asked if North Korea would return to the six-party talks, he said North Korea had already declared it has no intention of doing so. Some analysts are interpreting this as a demand for bilateral talks with the U.S.

Meanwhile, the foreign ministers at the forum, which draws together 27 countries including the 10 nations of ASEAN, 10 dialogue partners like South Korea and the U.S., and several other countries like North Korea and Mongolia, adopted a chairman’s statement. The chairman’s statement reportedly condemns North Korea’s rocket launch and second nuclear test, and calls for the country to return immediately to the six-party talks.

Posted by NO Base Stories of Korea at 1:37 PM