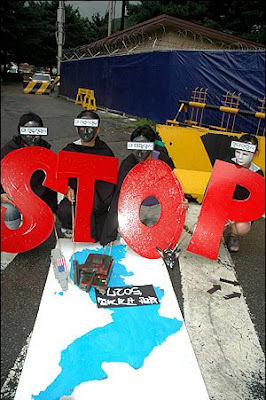 Below is the unofficial translation of the Tongil News(meaning 'Unification News') and needs proofreading.

The United Nations Command Informed the North Korea of the Ulchi Freedom Guardian, a Joint Military Exercise between the United States-South Korea,
next Month [August] 17 to 27:
Emphasizing It is a “Defense Exercise Not A Provocative Action”
July 24, 2009, Friday, Tongil News, Jung, Myeong-jin, mjjung@tongilnews.com

The 2009 Ulchi Freedom Guardian(UFG), a joint military training is practiced during the next month, 17 to 27.

The Combined Forces Command(Commander Walter Sharp) revealing as above on [July] 24, said that “The United Nations Command informed the North Korea of the 09 Ulchi Freedom Guardian that it is for the defense-related military readiness exercise, not the provocative actions in any aspects.”

Next, he repeatedly emphasized that “ Like any exercise, the 09 UFG is a common defensive exercise to make progress of the abilities of the US-SK alliance to protect the South Korea from the foreign invasion.”

Since last year, the UFG has been processed with the lead by Korean Joint Forces that is the Korean combat command headquarter and with the support by the United States Forces Korea Command(KORCOM). So to speak, it is exercising the ‘Korean Forces leading-United States Forces supporting system’.

The Unchi Freedom Guardian, renamed from the existing Ulchi Focus Lenz(UFL), this time is the biggest exercise with 10,000 United States Forces of Korea, 56,000 Korean Forces and 400,000 people from 4,000 institutes, including the public officers from the central government and the regional autonomy groups.

The repulsion of the North Korea against the US-SK UFG exercise is expected. In last August, the North Korea has revealed its criticizing position against the exercise through the spokesperson of the Panmunjeom representative committee of the DPRK military, of the Committee for the Peaceful Unification of the Father Land, DPRK, of the Department of the Foreign Affairs, DPRK, last August.

At the time, the spokesperson of the Panmunjeom representative committee has said the UFG exercise was “the new North Korea-invasion exercise, aimed to strengthen the ground operational ability, having the South Korean puppet military as cannon fodders and to increase the effects of the mid-long range precision attack and rapid maneuver attack by the U.S.A. imperialism invasion force against out strategic points.”

Otherwise, the Combined Forces Command (CFC) added that “ Because there is no field maneuver exercise in the 09 UFG, there will no reporting chance related to the exercise.” The UFG exercise is commonly composed of the CPX exercise being utilized with computer simulation.

http://minbyun.org/?document_srl=6160
(original site: SPARK (Solidarity for Peace And Reunification of Korea)
작전통제권 전면 환수 및 유엔사 해체 촉구 각계인사 선언
Statement from the Various Fields Regarding the Whole Returning Back of the Operational Control Right and the Dissolution of the United Nations Command
June 29, 2007
Posted by NO Base Stories of Korea at 7:36 PM