Text Fwd: Public sentiment calls for a resolution to the Yongsan tragedy 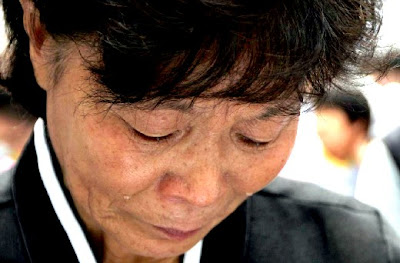 Image source/ description as the site below:
“A family member of victims of the Yongsan tragedy sheds tears during the memorial service held at the very site where her relative died, July 19”

The Hankyoreh Media Company
Public sentiment calls for a resolution to the Yongsan tragedy: As the Yongsan case reaches its six-month anniversary, citizens criticize the administration for acting like a police authority instead of governing responsibly
Posted on : July 20, 2009 11:52 KST


Although government institutions are closing ranks and remaining indifferent to the suffering of the surviving family members of the victims in the Yongsan tragedy, considering it “not their problem,” those family members who have been fighting for over 180 days for an apology from President Lee Myung-bak and an investigation of the incident continue to persevere. They held a “Second Citizens’ Rally to Restore Democracy and Save Public Welfare,” at the plaza in front of Seoul Station on Sunday, the eve of the six-month anniversary of the tragedy.

“Citizens lost their lives during an exercise of police authority, and the government is hiding behind the law,” said Ryu Joo-hyung, a spokesperson for the Committee Against the Brutal Suppression of the Yongsan Demolition Protest. The administration’s unresponsiveness has not been limited to the events in Yongsan. The possibility was presented that the Ssangyong Motors strike might turn into a “second Yongsan,” but the administration has ruled it out, calling the matter a “labor-management issue.” Whereas this was a case that could affect the entire domestic automotive industry, no clear solution was sought, with numbers of “lawbreakers” growing with each passing day. Critics are pointing out the only action the administration took during the Ssangyong strike was to arrest two labor union members and investigate some 200 other people. For this reason, some are charging, “There is no administration, just public authority.”

“If conflict occurs, the government’s duty is to step forward to resolve it. The Lee Myung-bak administration is shirking its duty in the name of ‘law and order,’” said New Progressive Party Chairman
Roh Hoe-chan. “This isn’t unresponsiveness, but instead, irresponsibility and incompetence,” Roh added.

Meanwhile, the Committee Against the Brutal Suppression of the Yongsan Demolition Protest announced Sunday its intentions to follow through on its previously announced coffin-bearing ceremony for five of the Yongsan victims Monday afternoon, after which members would head to Seoul Plaza to set up a memorial. In addition, they are planning a “memorial gathering and mass on the current situation half a year after the tragedy” at the site of the tragedy on Hangangno 2-ga Street in Yongsan-gu starting at 7:00 p.m. Monday.

Medical insurance costs and various taxes are still being requested for five of the victims in the Yongsan tragedy. Although six months has passed since their deaths, there is an absurd amount of administrative evidence pointing to the failure of the government to settle the affairs of the deceased.

“This was an incident where people across the country witnessed through media coverage how six citizens died as a result of police suppression, and yet, the government continues to hide behind the law and has left the case untouched for some six months,” said Ryu. “This government, which has not follow up on an incident where citizens died, let alone investigated the reasons for their death, has basically given up on being a government,” Ryu added.

Apart from the occurrence of the Yongsan tragedy itself, the fact that it remains unresolved half a year later has become a symbol of the government’s “disappearance.” Some are saying the government has been unresponsive in its approach to dealing with the situation since the incident took place and attribute the failure of resolving a conflict and turning it into a catastrophe to the administration’s refusal to listen to the people. Observers are saying this phenomenon began with the Yongsan tragedy and has been appearing in all areas of politics, the economy and society.

Some politicians and members of civil society have commented that this irresponsible and indecisive approach by the government is causing innocent members of the working class to abandon their ordinary lives and launch into a life-or-death battle against the government.

“I met with some merchants at small to mid-sized businesses a few days ago, who were complaining about difficulties to secure a livelihood due to the entrance of large-scale supermarkets, and they, too, are have begun to view the ‘Yongsan tragedy’ as their own and not someone else’s issue,” said Roh Hoe-chan. “The government’s basic responsibility is to first protect the weakest when conflict arises, but the Lee administration views the raising of those kinds of issues as a challenge to its authority. The ‘Yongsan situation’ is an incident symbolizing the government’s irresponsible behavior,” Roh added.

The government may not have budged over the past half-year, but a wave of public opinion sympathetic to the grievances of the surviving family members left behind by the Yongsan victims is spreading. There have also been increasing moves to help them.

When the incident first took place, there was a split in views on it along “ruling/opposition party” and “conservative/progressive” lines. The ruling party and conservative press placed responsibility for the tragedy on the demolition protestors. In early February, prosecutors arrested five protestors, conferring legitimacy to the government’s exercise of public authority. This appeared to mark the end of the case.

However, because the government has adhered to an unresponsive position, public opinion has moved in the other direction. Voices calling for an end to the pointing of fingers over the incident and for the active pursuit of a resolution by the government have been transcending divisions between conservatives and progressives.

This view has actively surfaced among religious leaders. Father Moon Jung-hyun of the Catholic Priests’ Association for Justice has held masses at the site of the Yongsan tragedy for over 100 days, since late March. He was joined in early May by Father Lee Gang-seo of the Archdiocese of Seoul.

http://nobasestorieskorea.blogspot.com/2009/03/fwd-cartoons-protest-against.html
Friday, March 27, 2009
Fwd: Fwd: Cartoons protest against the capitalism and for Palestine

http://nobasestorieskorea.blogspot.com/2009/01/appeal-text-fwd-imc-korea-urgent.html
Friday, January 30, 2009
Appeal text fwd: [imc-korea] urgent international appeal for 5dead while protesting against an imminent forced eviction in Korea
Posted by NO Base Stories of Korea at 11:55 PM