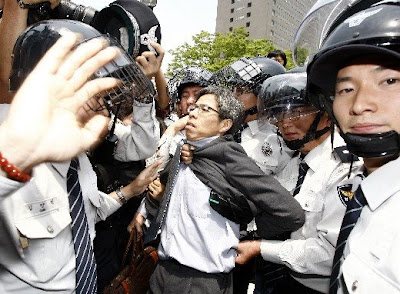 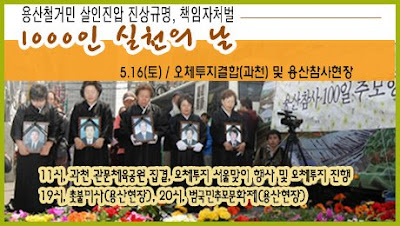 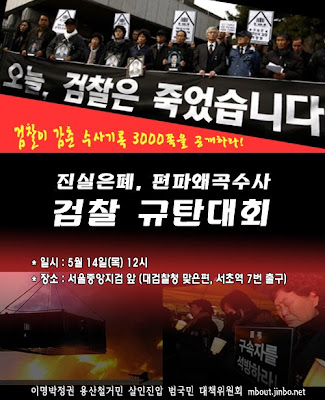 1. http://english.hani.co.kr/arti/english_edition/e_national/355092.html
Defendants of Yongsan trial file a countersuit:
They protest the trial’s fairness and continue to demand prosecutor’s compliance with the court order for full disclosure of investigation records
May 15, 2009

'Kwon Young-kuk, the lawyer working on behalf of victims and bereaved family members of the Yongsan tragedy, is arrested by police for participating in a demonstration to criticize prosecutors held in front of the Seoul Central Prosecutors’ Office in the Seocho neighborhood of Seoul, May 14.'

In Yongsan, Seoul, South Korea, we have an emergency. January 20th, 2009, 1,500 police including the Korean SWAT team made a surprise attack on comrades who were trying to resist forced eviction and the Seoul Metropolitan Government (SMG) “redevelopment” (or gentrification) program. This so-called “redevelopment” program has continued since the 1960s as an effort to transfer capital, shelter and wealth into the hands of large corporations like Samsung, Posco and Hyundai. Many people can’t afford to pay rent in these apartment complexes and buildings that these huge corporations are establishing with the support of the SMG.

After a large group of comrades who were occupying a building in Yongsan, Seoul, were surprise attacked on January 20th, 6 people were killed in a fire.

The SMG is trying to prosecute members of the National Evictee Alliance who were taking part in the occupation. These comrades are still having a sit-in struggle at the same building in Yongsan. A few months ago, the Candle Light Media Center was established in a building behind the sit-in struggle site. The media center is where many activists gather to work on media projects together.

So far, the prosecutors have released 500 pages of the 3,000 hidden pages of the investigation report. These 500 pages have shown that the National Evictee Alliance comrades never attacked anyone, but used molotov cocktails in self-defense when police and thugs hired by construction corporations attacked. The 500 pages also show that rank-and-order police (including SWAT team) were not informed that the building contained paint thinner while the high-ranking authorities were aware of this fact when they made the decision to attack the occupied building.

The defense attorneys are suspicious that the remaining 2,500 pages provide evidence that the police and SWAT team attack was reckless and resulted in the deaths of 6 people. The trial is currently pending because the defense team is trying to take the case to the supreme court.

We need these 2,500 pages that the prosecutors are trying to hide from the defense team. We also need our right to shelter protected and not subjected to the brutal market economy.

Your comrades in Yongsan, Seoul need your help!

Please do something to help because this state apparatus needs people from around the world to shout at it!

I bet you can’t have a solidarity demonstration at your local Korean Embassy! Or can you?

I bet you can’t send an e-mail to the prosecutors and demand that they release the remaining 2,500 pages of the investigation report! I bet you’re way too lazy! Or maybe not?

* Related blog
http://nobasestorieskorea.blogspot.com/2009/01/appeal-text-fwd-imc-korea-urgent.html
Friday, January 30, 2009
Appeal text fwd: [imc-korea] urgent international appeal for 5dead while protesting against an imminent forced eviction in Korea
Posted by NO Base Stories of Korea at 5:12 AM