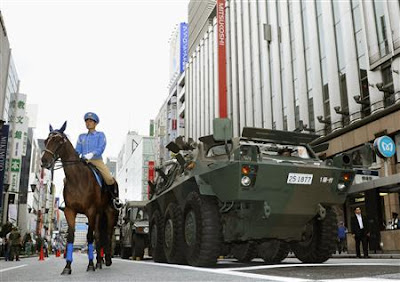 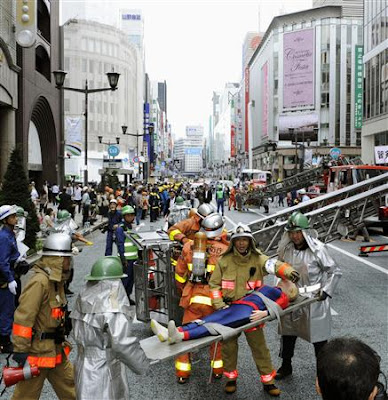 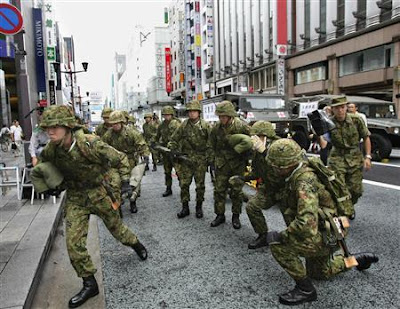 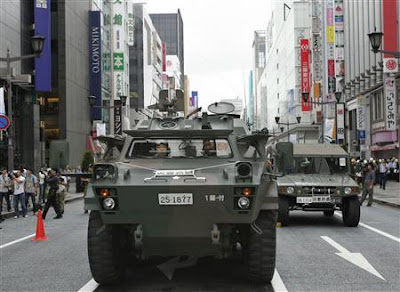 These photos are from this year's dispatch drilling of
the riot task force of Metropolitan Police in Tokyo
carried out today[May 22, 2009] in one of the biggest parks in
central Tokyo.

2,700 riot force officers and more than 140 vehicles,
including some special ones for dealing with chemical and
biological weapons, participated in this ostentatious parade.

Hawkish Tokyo governor carries out another annual
training in central Tokyo for enhanced preparedness towards
natural disasters. These practices are getting more and more
citizens involved, ranging from school children from
some nearby schools, nurses in training, etc.
More than 15,000 SDF officers and citizens participate
in 2008 with so many tanks, armored trucks, F14 and other
fighters. Some tanks and armored trucks appeared
even on Ginza streets, where SDF’s frightened shoppers as
they moved around in Ginza.
(Ginza can be compared to the 5th avenue in NY.)
http://sankei.jp.msn.com/affairs/disaster/080831/dst0808311214002-n1.htm

I don't know whether you may find this normal or abnormal,
but this is very abnormal in Japan as we have the peaceful
constitution. SDFs had restrained from emerging before
citizens until this governor began such drills.

These days, ASDF also tend to be as much 'visible as
possible in local areas as well. They intend to fly
their train planes even on some cultural occasions held
by citizens. Two weeks ago in a southern prefecture,
they revealed such a plan, so some 50 people around Japan,
including Syuko Yamashita, a city rep who participated in Seoul
Conference, as well as I, sent objections via telephone calls
or faxes. Three train planes did fly, but flew higher.

This situation is everywhere under the pretext of 'disaster
prevention drill.'

This is not only for an annual drilling but for forcibly
involving local citizens in such drills, making local residents'
associations ones convenient for their control and visil.

Just this morning, Obama's new ambassador to Japan was
revealed to us. I hope this is a good sign for a "change"
here. I don't know what kind of person he is, but
he may be much better than Nye for us.”
Posted by NO Base Stories of Korea at 12:13 PM