Text Fwd: Excessive use of force by police during KCTU and KCTWU labor rally 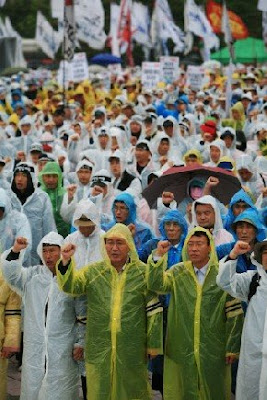 * Image source/ description" same as below*
' Approximately 15 thousands members of the Korea Cargo Transport Workers’ Union participated in the rally to launch a general strike held in front of the Daejeon Government Complex, May 16.'

http://english.hani.co.kr/arti/english_edition/e_national/355443.html
Excessive use of force by police during KCTU and KCTWU labor rally: Labor rally in Daejeon leads to mass arrest of delivery drivers and unionists
Posted on : May.18,2009 11:11 KST

Some 457 workers were arrested, and an estimated 150 workers and police injured during a clash between protesters and police at a labor rally convened in Daejeon on Saturday by the Korean Confederation of Trade Unions (KCTU, Minju Nochong) and the Korea Cargo Transport Workers’ Union (KCTWU). The government reacted to KCTWU’s decision Saturday to launch a general strike by threatening a harsh response and banning future KCTWU and KCTU demonstrations. Observers are concerned about a precipitating clash between labor and the government.

The KCTU and KCTWU convened a rally attended by some 15,000 unionists at Nammun Square in front of the Daejeon Government Complex on Saturday afternoon, and demanded the return to work of delivery drivers fired from Korea Express and the labor rights of ‘specially-employed’ laborers. After the rally, participants conducted a march, during which police moved to suppress the demonstration with clubs and water cannons, leading to a heated clash with resisting, flag-waving demonstrators.

Daejeon police said the protesters, armed with bamboo spears, severely injured two policemen and damaged 99 vehicles, including police buses, and 155 pieces of police equipment. They said they would detain those who assaulted police and destroyed public property, and that they soon planned to arrest the protest leaders, including the leadership of the KCTU and the KCTWU.

The police added they would seek compensation and ban future demonstrations by the two unions. When asked about the matter, Park Sang-hyeon, director of the Korea Cargo Transport Workers’ Union’s legal bureau, said that after breaking up the demonstration, police indiscriminately arrested workers, even those who were merely having dinner or were on their way home. Park said in the end, the police should be held responsible for their use of excessive force.

Tongil News(Unification News)
http://www.tongilnews.com/news/articleView.html?idxno=84350
Posted by NO Base Stories of Korea at 8:04 PM