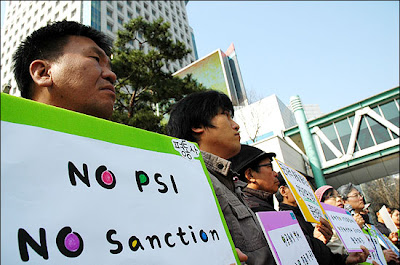 * Image source: same as below.

* Solidarity for Peace and Reunification of Korea on May 26, 2009

(Translatation by No Base Sories of Korea and Agatha Haun)

The United States should promptly take steps to abolish its hostile policies toward North Korea and to support the denuclearization of the Korean peninsula!
On May 25, North Korea conducted its second nuclear weapon test. It was anticipated as the reaction to the UN Security Council's denunciation of North Korea's recent launching of a satellite and to the sanctions against North Korea. The tension and the confrontation surrounding the Korean peninsula have intensified since the UN Security Council again proceeded to criticize North Korea's action and to impose sanctions.

Past experience shows that sanctions and pressure against North Korea do nothing to solve the problems, but rather worsen the situation. We also want to point out that the Obama administration’s “benign neglect” is only an irresponsible way to avoid seriously confronting and settling the North Korean nuclear issue. Therefore, the United States and other concerned countries, particularly those involved in the 6-Party talks, China, Japan, the Republic of Korea, and Russia, should not seek to solve the problem by having the UN Security Council impose sanctions against North Korea, but rather by actively engaging in dialogue to deal with the North Korean nuclear issue. It is needless to say that North Korea's real intention, first and last, is to send the message that it wants dialogue with the United States, on the basis of equality and mutual respect.

If both countries, the United States and North Korea, act in good faith to seek an equitable settlement of the North Korean nuclear issue, according to the principle of "action for action", through the process of equal and fair negotiation, it is possible to achieve rapid and positive results. There is a precedent for this approach, which proves that such results can be achieved: in October 2000, the landmark agreement known as the "Joint Communique*" between the United States and Korea was concluded, providing for the establishment of a structure of peace on the Korean peninsula .

If the US renounces its hostile policy against North Korea, a peace agreement is concluded on the basis of the denuclearization of the Korean peninsula, and normal relations are established between the United States and North Korea, according to the terms of the Joint Communique, the way for the denuclearization of the Korean peninsula will open very quickly and easily. The United States has no need to be afraid of dialogue or reluctant to enter into negotiations. The time for confrontation and conflict is past. This current situation presents the countries concerned with an opportunity to begin a new phase in their relationship.

Posted by NO Base Stories of Korea at 8:16 AM