Remembering a Life and Death of a Korean: Roh, Moo Hyun, former South Korean President, 2003 to 2008 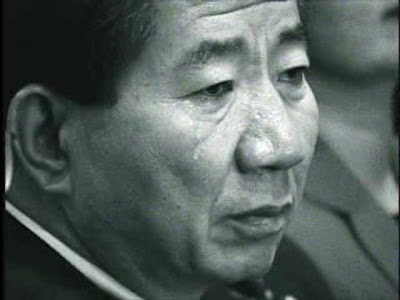 
SEOUL, South Korea (AP) -- Former President Roh Moo-hyun, embroiled in a penetrating corruption investigation, leaped to his death - a shocking end for a man whose rags-to-riches rise took him from rural poverty to Seoul's presidential Blue House. He was 62.

Roh, a self-taught lawyer who never attended college and didn't have the elite background typical of Seoul politicians, had prided himself on being a "clean" leader immune to South Korea's traditional web of corruption.

Allegations that Roh, president from 2003-08, accepted $6 million in bribes from a businessman while in office weighed heavily on the ex-leader, who appeared emotionally wrought last month as he prepared to face prosecutors.

Roh hurled himself off a 100 foot (30 meter) high cliff early Saturday while hiking, trailed by a security guard, near his home in Bongha, police in the nearby southern port city of Busan said. Life had become unbearable and "too many people are suffering because of me," Roh wrote in a note found on his computer, police said.

"What's left for me for the rest of my life is just to be a burden to others," his note said. "Don't be too sad. Aren't life and death both part of nature? Don't feel sorry. Don't blame anybody. It's destiny." He asked to be cremated, a small gravestone erected near his home.

Roh's suicide stunned the nation. At train stations and shopping malls across the country, South Koreans were glued to TV monitors. Many snapped up special newspaper editions about Roh. Tens of thousands flooded his Web site, many posting condolences.

"I was utterly shocked," said Chun Soon-im, 63, of Seoul. "They say 'hate the sin but not the sinner,' and that's how I feel. The investigation must continue and we must get to the truth, but I cannot help feeling sorry for the man and those left behind."

Mourners wailed as Roh's coffin, draped in red, returned to Bongha from a Busan hospital. His two children, sobbing, followed the casket to the community center near his birthplace of Gimhae, some 280 miles (450 kilometers) from Seoul. About 13,000 people had paid their respects at a mourning site at the village's community center, police said.

Hundreds of riot police were deployed at the memorial service to keep order if it turned violent but there were no immediate reports of clashes.

Roh's backers accuse conservative supporters of President Lee Myung-bak, who took over from Roh in February 2008, of carrying out the probe as political revenge. Near Seoul's City Hall, Roh supporters stood in line to sign a petition seeking Lee's impeachment.

In Washington, President Barack Obama said he was "saddened" by the news and offered his condolences to Roh's family and the South Korean people.

The corruption accusations were deeply shameful to Roh, who built a reputation as anti-corruption crusader.

"I feel ashamed before my fellow citizens. I am sorry for disappointing you," Roh told supporters three weeks ago before turning himself over to prosecutors who grilled him for more than 10 hours.

During the interrogation, Roh denied the allegations against him, the prosecution spokesman Cho Eun-sok said.

His death was a tragic end for the humble son of farmers who never attended college but still managed to pass the country's tough bar exam in 1975 and opened his own practice three years later.

He forged a reputation as a human rights lawyer, defending students accused of sedition under previous military-backed administrations. He once was arrested and his law license suspended for supporting an outlawed labor protest.

Roh's political career took off with his election as a liberal lawmaker to the National Assembly in 1988.

His ascension to the presidency came in a surprise 2002 election win on a campaign pledge not to "kowtow" to the United States, one that resonated with young voters.

Though criticized as inexperienced and confrontational by some, Roh was praised by others as a humble, candid leader who pushed for political reform and fought against corruption.

© 2009 The Associated Press. All rights reserved. This material may not be published, broadcast, rewritten or redistributed. Learn more about our Privacy Policy.

http://english.hani.co.kr/arti/english_edition/e_national/356619.html
Former S. Korea President Roh summits suicide
Roh discloses the pressure of the investigation in a final note, saying, “The pains which I have received are also countless”
Posted on : May.24,2009 11:37 KST

http://english.hani.co.kr/arti/english_edition/e_national/356616.html
[Analysis] What caused Roh’s suicide : Feeling victimized or feeling burdened?
According to his last remarks, antipathy against prosecutors could have played a part, however, he also expressed a concern about being a burden to democratic movements
Posted on : May.24,2009 11:11 KST Modified on : May.24,2009 11:35 KST

http://english.hani.co.kr/arti/english_edition/e_national/356610.html
An embarrassed GNP and an enraged DP anticipate a controversy of political retaliation
GNP members express concern for possibilities of “public opinion turning against the current government,” while DP members say, “everyone knows what caused this tragedy”
Posted on : May.24,2009 10:42 KST Modified on : May.24,2009 11:29 KST

http://hosted.ap.org/dynamic/stories/A/AS_SKOREA_OBIT_ROH?SITE=AZTUC&SECTION=HOME&TEMPLATE=DEFAULT
May 24, 2:02 AM EDT
Thousands stream to SKorean village to pay respect to ex-President Roh a day after his suicide
By YOUNG-JOON AHN
Associated Press Writer

Posted by NO Base Stories of Korea at 4:56 PM