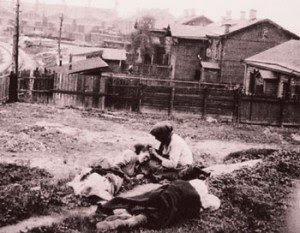 * Image source: same as below

http://sabbah.biz/mt/archives/2009/05/24/holocaust-and-holodomor-origins-of-anti-semitism/Holocaust and Holodomor (Origins of Anti Semitism)
Posted: 24 May 2009 09:51 AM PDT
By Nicholas Lyssson

1. ROLE OF JEWS IN UKRAINIAN FAMINE

One might think the worst holocaust deniers—at least the only ones who command serious attention—are those who insist the Nazi holocaust, as it involved the Jews only, was without parallel.

Guenter Lewy argues for example in The Nazi Persecution of the Gypsies (Oxford University Press, 2000) that while the Gypsies were gassed, shot and otherwise exterminated in great numbers, right alongside the Jews, they were not true victims of “the” Holocaust (capital “H”) but only of something collateral. Lewy even suggests the Gypsies invited their own destruction with certain cultural traits—in particular, sharply divergent moral standards for dealing among their own and with outsiders.

But pre- or anti-Enlightenment Judaism is hardly a less ethnocentric or hostile moral system. As Edward Gibbon correctly notes in The Decline and Fall of the Roman Empire, vol. 1, ch. 15 (1776), “the wise, the humane Maimonides openly teaches [in The Book of Torts, 5:11] that, if an idolator fall into the water, a Jew ought not to save him from instant death.” See also Rabbi Simeon ben Yohai’s remarkable second-century exercise in ejusdem generis: “The best of the heathen merits death; the best of serpents should have its head crushed; and the most pious of women is prone to sorcery” (Yer. Kid. iv. 66c; Massek. Soferim xv. 10; comp. Mek., Beshallah, Wayehi, 1, and Tan., Wayera, 20, all as cited by JewishEncyclopedia.com). For “heathen” some translators simply write “goyim”; for “prone to sorcery” they write “a witch.” Rabbi Simeon is mentioned more than 700 times in the Talmud.

Israel Shahak and Norton Mezvinsky, in Jewish Fundamentalism in Israel (2d ed. 2004), say (p. 1) “that in the usual English translations of talmudic literature some of the most sensitive passages are usually toned down or falsified,” and indeed (pp. 150-51) that “the great majority of books on Judaism and Israel, published in English especially, falsify their subject matter,” in part by omitting or obscuring such teachings. For a fuller discussion of the point, see Shahak, Jewish History, Jewish Religion: The Weight of Three Thousand Years, esp. ch. 2 (1994), available online. As to Jews, Gypsies or anyone else, of course, ethnocentrism or even outright cultural hostility as a rationale for genocide is obscene.

A particularly relevant parallel to the Nazi holocaust is the Ukrainian holodomor of 1932-33, a state-created famine—not a crop failure—that killed an estimated five million people in the Ukraine, one million in the Caucasus, and one million elsewhere after the Soviet state confiscated the harvest at gunpoint. Throughout the famine, the state continued to export grain to pay for industrialization. See Robert Conquest, The Harvest of Sorrow (Oxford University Press, 1987). Norman Davies gives the following description in Europe: A History, p. 965 (Oxford University Press, 1996). His first paragraph assembles quotations from Conquest; the bracketed phrase is his own:

“A quarter of the rural population, men, women and children, lay dead or dying” in “a great stretch of territory with some forty million inhabitants,” “like one vast Belsen.” “The rest, in various stages of debilitation,” “had no strength to bury their families or neighbours.” “[As at Belsen] well-fed squads of police or party officials supervised the victims.”

. . . All food stocks were forcibly requisitioned; a military cordon prevented all supplies from entering; and the people were left to die. The aim was to kill Ukrainian nationhood, and with it the “class enemy.” The death toll reached some 7 million. The world has seen many terrible famines. . . . But a famine organized as a genocidal act of state policy must be considered unique.

Posted by NO Base Stories of Korea at 9:29 AM