Text Fwd: Government announces a ban on assemblies in Seoul 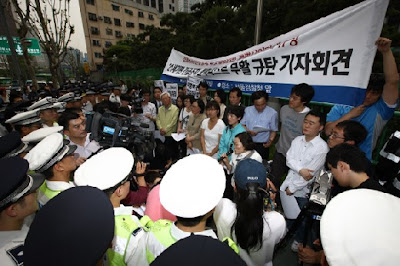 * Image Source/ Description*
Same as article below
"Members of the umbrella Network of Civic Organizations for Keeping Democracy Alive and Stopping Suppression that consists of social organization and political parties, including Jinbo Corea[ Korean Alliance for Progressive Movement] and the Democratic Labor Party, hold a press conference in front of the Seodaemun Police Station in Seoul to protest excessive police violence, May 20."

http://english.hani.co.kr/arti/english_edition/e_national/356066.html
Government announces a ban on assemblies in Seoul:
Civic organizations form a countermeasure network for maintaining constitutional rights and plan to hold a large-scale demonstration in Seoul
Posted on May 21, 2009


The government announcement on Wednesday that large-scale assemblies held in Seoul cannot be permitted has led to criticism.

In response on the same day, more than eighty social and civic organizations, including the People’s Solidarity for Participatory Democracy, formed the Network of Civic Organizations for Keeping Democracy Alive and Stopping Suppression to serve as an umbrella organization to protect the right of assembly and protest.

Meanwhile, there are concerns of an expansion of conflict between labor and government, as unions are planning to move ahead with the launching of a general strike set for later this month.

In a press conference presided over by Prime Minster Han Seung-soo and with representatives from all of the related ministries in attendance, the government on Wednesday decided to discontinue permits for large scale demonstrations in the center of the city of Seoul, and based on this decision, police have been granted the power to arrest persons on the spot for committing the now illegal act of meeting.

Prime Minister Han said, “The government intends to counter illegal strikes and violent demonstrations that could have negative effects on the nation’s economy. To reach the level of an advanced nation, it is necessary to correct the backwardness of our demonstration culture.”

In response to this announcement from government, the Network of Civic Organizations for Keeping Democracy Alive and Stopping Suppression held a press conference in front of the National Policy Agency to criticize the government’s actions and said, “The right of assembly and demonstration which has been guaranteed by the Constitution has now been turned into a crime more serious than any other crime upon society.”

The network initiating the campaign plans to submit 100 demonstration proposals to the police and expects to analyze the terms of rejection. It is also planning to hold a large-scale demonstration to protect the right of assembly in Daehakno, Seoul on May 23.

http://english.hani.co.kr/arti/english_edition/e_national/356463.html
Police indiscriminately summon student activists
Assembly bans in urban centers lead to concern about a revival of authoritarian forms of oppression
Posted on : May.23,2009 12:18 KST

http://english.hani.co.kr/arti/english_edition/e_national/356262.html
Legal scholars assess ban of assemblies in urban centers as unconstitutional:
Civic organizations protest new ban, while critics say government is reverting to controls used prior to democratization
Posted on May 22, 2009