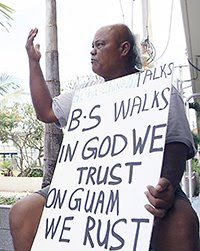 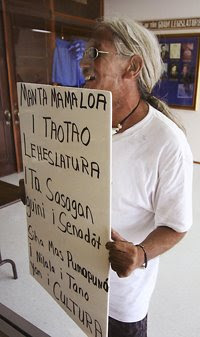 * Image source and description*
'Howard Hemsing and (top) Danny Jackson, two of the most vocal activists on Guam, hold placards during a protest rally at the legislature in this Jan. 3, 2008 file photo. The island’s young people will take over the scene of activism during an upcoming rally in Hagatna. Photos by Paul Blas

THE Guåhan Youth, an umbrella group for the island’s youth and grassroots organizations, will hold a rally that will amplify their collective voice that has been muffled amid rapid changes resulting from the ongoing military buildup and what some people consider “federal interference.” The rally, billed “Reclaim Guåhan: Chule' Tatte Guåhan,” will be a venue for education, expression and empowerment, featuring honored speakers, poetry, art, film showings and local music among others.

The overall goal to teach those in attendance about the island’s critical issues and the ability to express various opinions will be highlighted throughout.

The rally is scheduled to be held from 2 to 8 p.m. on May 23 at Skinner’s
Plaza in Hagåtña.

“It stems from the $1 million a week put forth by Judge [Frances] Tydingco-Gatewood, which we saw as federal interference on local governance,” stated primary event coordinator Victoria-Lola Leon Guerrero.

She cited such factors as the military buildup, land grabbing and lack of self determination as central reasons that prompted the Guåhan Youth to initiate a rally that centralizes on indigenous people’s self determination and other fundamental freedoms.

“It’s amazing that a lot of it is coming from the youth. People shouldn’t have to resign to hopelessness. The rally is intended to empower future generations to take leadership,” said Leon Guerrero, adding that the Guåhan Youth will show what they are “capable of as a community.”

“It’s frustrating to know that no one has spoken out,” said Leon Guerrero. “We need to focus on our language and culture in order to help stop all of this, and keep it as the land of the Chamorros. We don’t have power as a nation, but it is something that we are entitled to.”

“It’s important for young people to take responsibility for what will be their future. I will not take credit for this ingenious movement,” Quinata said. “It’s a great way to get information out to the community.”

She added that “It’s very important to have our young generation take firm grip of the reality of what’s happening on our island. They’re being responsible and forthright.”

Posted by NO Base Stories of Korea at 9:22 AM