Text Fwd: ITALY AS BASE FOR U.S. DOMINATION OF AFRICA 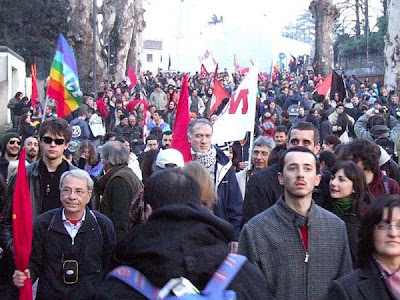 I included some words on the blog the other day from activists in Vicenza, Italy who were sending their solidarity wishes to the folks in South Korea. The US has two military facilities in Vicenza and wants to build a new base in that community which has created a firestorm of protest by the citizens. They have tried every "legal and legitimate" form of protest and have been repeatedly denied. Finally, after trying to hold a local referendum on the question, they were again denied by their national government. So they went ahead and organized the city-wide vote on their own and found that 95% of the people in the community are opposed to the base.

But why another base in Italy? What is the mission? Below please see an interview with Rep. Loretta Sanchez (D-California) who was recently in Vicenza and was interviewed by the local newspaper. She serves on the Military Strategies Subcommittee of the House Armed Services Committee.

Sanchez: "The military policy of the United States is passed by Congress. That is why the position of the U.S. has not changed in the transition between George W. Bush and Barack Obama. But all the decisions have already been made."

Newspaper: Why does even President Barack Obama believe in the Dal Molin project? Why hasn't there been, as expected by opponents of the project, any changes in the plans?

Sanchez: "We're working on a plan to consolidate the presence of our troops in the world, to be ready to intervene in sensitive areas such as Africa, the Middle East, the former Soviet republics in Asia. We believe that to give an effective response to these issues, to be closer to the places of possible tensions and conflicts, it is essential to reinforce our troops in Italy. For this reason we have chosen to unite the 173rd Brigade in Vicenza. There will be no second thoughts. All decisions have been made by the two governments. The plan and the allocation of the budget were voted by the Congress. It is no coincidence that Obama has confirmed the Secretary of Defense appointed by the Bush administration, that is Robert Gates."

Newspaper: Why is the role of Italy so important in the eyes of Americans, in the international arena?

Sanchez: "First, because Italy is geographically located close to areas most at risk, between Africa and the Middle East. And because Italy has been our longtime ally. The U.S. shares the same value system and lifestyle. We can count upon the Italian government, which from Prodi to Berlusconi has done everything that was needed to promote the alliance and the plan of consolidation of our troops at Dal Molin."

Newspaper: What type of military installation will be?

Sanchez: "I can guarantee that the project follows the most stringent environmental regulations. There will be no artillery, no aircraft. This will simply be a place where paratroopers will stay with lighter equipment and their families."

Newspaper: Does the transformation of American command stationed at Camp Ederle to Africom [Pentagon's Africa Command] signify a change to the military targets of the Pentagon?

Sanchez: "No, it is the demonstration of an emphasis on the African continent. I spoke with Obama about it. Africa needs help, even if operations are guided by a military command, the objectives are not primarily military. My hope is that the military strategies can be enhanced while investing fewer dollars. I believe a lot in diplomacy and dialogue as President Obama."

So there you see how it works in Washington. The Democrats agree with the expansion of the US military into Africa, ostensibly for "humanitarian" purposes, but we know that the strategy is really about controlling the continent's vast resource base.

Sanchez is considered a "liberal" Democrat - that is until the question of US empire comes up. Then the two war parties link arms and maintain solid support for the corporate-military domination of the world.