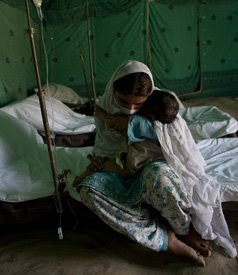 * Text informed by Bruce Gagnon
* Image source/ description: Same as the article below


During the last thirty years of wars in Afghanistan, Afghan civilians have had one safe place to escape to: Pakistan.

They fled the Soviet invasion. They fled civil wars. They fled US bombing. Pakistan took care of millions of these Afghan refugees.

Now that safe haven with its lush green valleys is burning with bombs.

And the hosts, the people who themselves welcomed Afghan refugees, at times literally into their homes or into campsites on their farms, are on the run. They are streaming out of Swat, Dir and Buner and registering as refugees in Mardan and the fertile valleys of Pakistan. The UN says about two million Pakistanis have been displaced during the last year of drone attacks, bombing and fighting.

Pakistan is bombing its own land and its own people, who are caught between the Taliban and the Americans.

Whomever I talk to among Pakistanis, it seems, there is an emerging consensus. They hate both the Taliban who blast schools and the Americans who bomb Madrasahs. Both kill civilians.

The Soviets could not win by bombing Afghanistan, although even today, bomblets and mines left over by the Soviets kill and injure 60 Afghans a month.

And American bombings in Afghanistan are so ineffective and counterproductive that even the puppet president Karzai is consistently and publicly campaigning against the air strikes. He told CNN recently that "We believe strongly that air strikes are not an effective way of fighting terrorism," adding that "air strikes rather cause civilian casualties and do not do good for the US, do not do good for Afghanistan."

Just last Sunday, May 10, hundreds of students in Kabul held protests over US air strikes in the Farah province that killed nearly 150 Afghan civilians.

Students held up banners, including one describing America as "the biggest terrorist in the world," according to the BBC.

It is unfortunate that while the US has refused to listen to President Karzai, it has now successfully persuaded President Zardari of Pakistan to do the same. The Pakistani air force is using bombers and helicopters to bomb the "Taliban positions" and declare that they have already killed 200 of them. Zardari is asking for drones so they can do exactly what the US is doing. Yet, even the US air strikes have failed to accomplish their stated goals. There have been 65 to 85 US drone attacks on Pakistan, killing about 780 civilians and about 50 alleged terrorists.

I wonder which technology allows soldiers flying tens of thousands of feet high in the air to distinguish between one guy dressed in Salwar Kameez and another guy also dressed in Salwar Kameez? This is the dress all Taliban and all civilians use in that area. It is next to impossible to distinguish between them unless you are on the ground and know the language and the culture. The result is that wherever there is a crowd, people are at risk of being killed, be it a wedding party or any other gathering. It is so difficult to understand, from the air, what lies below that the US planes have ended up dropping a few bombs on Pakistani Frontier Corps outposts, killing 11 Pakistani border guards who all dress in the same Salwar Kameez as others. To confuse things further, for American air force pilots and video shooters handling war drones from sites as remote as Nevada, the Taliban, civilians and Frontier Corps all sport beards. And, culturally, most men in these mountainous areas will carry a gun, even if they are not fighting.

Pakistan cannot solve its problems by bombing its people.

The culprits are in the midst of people. The population is by and large with them since they are sick and tired of foreign intervention, corrupt governments and the absence of justice.

Just imagine that despite a seven-year-long massive air and ground hunt for Osama bin Laden and despite the US having placed on him the highest bounty in the history of humanity, which has been doubled to $50 million, all trails have gone cold to find Osama bin Laden.

Even when the US cornered bin Laden in the Tora Bora complex (which was built with CIA help during the "good Jihad" against the Soviets) he managed to escape; this despite the use of "Daisy Cutter bombs" which Rear Adm. John Stufflebeem of the Joint Chiefs of Staff described as "the most powerful in the US arsenal."

Unless the US does a massive ethnic cleansing, the Afghans/Pathans will win in their lands, no matter how many drones and air strikes take place.

No wonder, Lord Curzon, the former British viceroy of India (1899-1905) who achieved peace with the Afghans and created the current Pakistani province of NWFP, said:

"No patchwork scheme - and all our present recent schemes, blockade, allowances, etc., are mere patchwork - will settle the Waziristan problem. Not until the military steamroller has passed over the country from end to end, will there be peace. But I do not want to be the person to start that machine."

The British were wise enough to stop invading Afghanistan after 100 years of wars. The date on the Afghan flag signifies that victory. In an apparently unrelated event, the wise Lord Curzon was appointed as the foreign secretary of the British Empire in the same year.