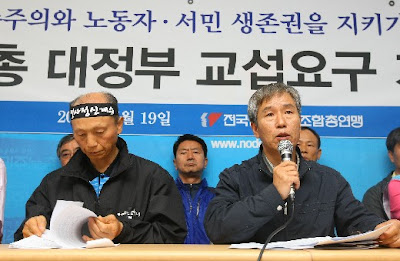 *Image source/ description *
Same as the article below

'Lim Seong-kyu, the chairman of Korea Confederation of Trade Union, briefs their suggestion to negotiation with government at the press conference in its headquarter, Yeongdeungpo district, Seoul on May 19.'

http://english.hani.co.kr/arti/english_edition/e_national/355835.html
KCTU invites government to the negotiation table: While the Labor Ministry decides their course of action, Daejeon Police apply for arrest warrants for union officials in relation to the May 16 rally
Posted on : May.20,2009 10:57 KST

The Korean Confederation of Trade Unions (KCTU, Minju Nochong) has proposed talks with the government to discuss policies to overcome the economic crisis and pending labor issues, including the rights of specially-employed laborers and the firing of Korea Express drivers.

At a press conference held at a meeting room at its headquarters in Seoul’s Yeongdeungpo district on Tuesday, the KCTU said it had sent a written request for talks to President Lee Myung-bak and was awaiting a concrete response. They said they are demanding that the government form a negotiating team of ministers from responsible ministries to participate in talks.

The request included demands for the introduction of a national safety net for the unemployed, the regularization and guarantee of rights of irregular workers, job protections and the guarantee of a minimum wage. In relation to recent labor issues, the KCTU also demanded the return to work of fired Korea Express drivers, the withdrawal of layoffs from Ssangyong Motors, and recognition of unions of specially-employed workers.

The KCTU said the government’s measures to overcome the economic crisis have all been for the rich, and since the union has proposed concrete policy tasks, it calls on the government to come to talks. The KCTU added that It plans to put together a negotiating team composed of its chairman, executive officers and delegates from affiliated industrial unions and regional headquarters, and demands that a first round of talks take place on May 26. The KCTU said if the government refuses the offer, it will continue to struggle with the government and launch a general strike on June 10. Labor Ministry spokesman Lee Jae-heung said the government would respond after considering whether the KCTU’s offer was genuine or simply offered in order to provide justification for a strike.


Meanwhile, Daejeon Daedeok Police Station said Tuesday it had applied for arrest warrants for seven KCTU officials, including Korean Transport Workers’ Union (KCWTU) Chairman Kim Jong-in and KCTWU Headquarters Chief Kim Dal-sik. Police explained that they applied for the arrest warrants for the seven officials who had led the memorial rallies for late KCTWU Gwangju Chapter Chief Park Jong-tae in Daejeon on May 6, 9 and 16 because they had been asked several times to appear for questioning about the May 16 rally, but have failed to respond.