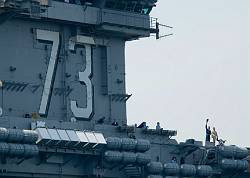 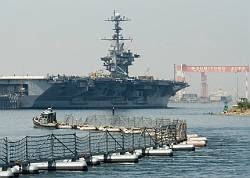 “Above, Sailors on the flight deck of the Nimitz-class aircraft carrier USS George Washington (CVN 73) wave goodbye to loved ones as the ship departs Commander Fleet Activities Yokosuka (CFAY) for a scheduled underway.

The ship and crew, along with Sailors from embarked Carrier Airwing (CVW) 5, are now underway to conduct advanced cyclic flight operations to return the ship to full combat readiness following its first Selective Restricted Availability which wrapped up earlier in May.

Aiello said that COE certification is an important milestone, because it proves that the ship and Airwing team meets established criteria of efficiency and safety during aircraft launch and recovery operations. Successful completion of COE would allow CVW-5 and GW to fly over open ocean, without the requirement for a divert airfield if operationally necessary.

Aiello added that the air wing also expects to conduct some air-to-ground strike training while at sea. He said this is a good test of the ship and air wing’s ability to handle weapons, load them onto aircraft, and employ them on overland targets.

CVW-5, commanded by Capt. Michael S. White, has operated from Naval Air Facility Atsugi, Japan since 1973, and is the Navy’s only for¬ward-deployed, co-located air wing. CVW-5 has called GW home since the aircraft carrier’s arrival in Japan last September when it replaced the recently decommissioned USS Kitty Hawk as the Navy’s only permanently forward-deployed aircraft carrier.

GW heads back to sea just days after completing several other significant milestones. The ship returned to Fleet Activities Yokosuka May 15 after ten days at sea, during which the ship completed sea trials, flight deck certification and carrier qualifications.

Following the Combat Operations Efficiency evaluation, George Washington expects to conduct its first annual summer deployment supporting security and stability in the western Pacific region."
Posted by NO Base Stories of Korea at 4:04 PM