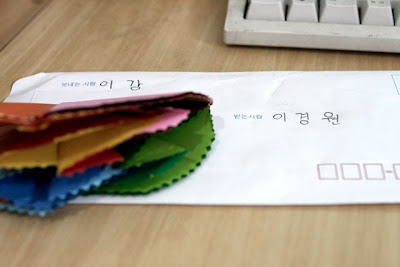 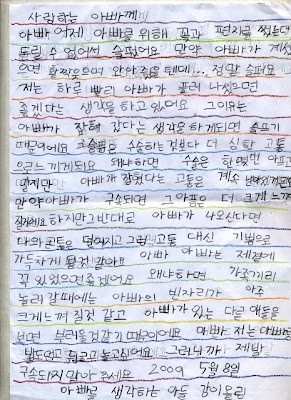 Kang is a 11 year old son of Mr. Lee, Kyeong-Won, the arrested on May 7, 2009 when there was the NIS raid. Before the news that all the six were decided to be placed under restraint was known, he had written to his beloved dad, praying for the release of his father. The below is the English translation of his letter above.

I had prepared the [paper] carnation [I made] (photo above) and written the letter for you yesterday but was sad because I could not give you them. Only if you had been with me, you would hug me, with a wide smile…I am really sad.
I am thinking of how good it would be if you are released soon because I am sad to think that you were arrested. The reason is because I feel it as more severe suffering than operation. While operation will be painful just several times, the pain by your restraint will be continuously remained* . However, if you are released soon on the contrary, pain will be decreased and the joy will greatly fill me. I desperately hope you and mom are with me. Because I am afraid that your emptiness would be felt so big whenever there is family vacation and I am afraid that I would be so envy of other friends. I want to have a meal with you, hug and play with you. So that is why I so pray that you will not be under restraint.

http://nobasestorieskorea.blogspot.com/2009/05/text-fwd-nis-raids-19-places-related-to.html
Friday, May 8, 2009
Text fwd: NIS raids 19 places related to the unification movement
Posted by NO Base Stories of Korea at 4:44 PM