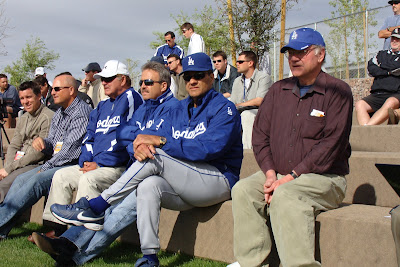 Bill Sulzman loves the Los Angeles Dodgers baseball team and in the photo above (on the right) found his way onto their Arizona spring training bench this year, right next to manager Joe Torre, for a quick snapshot.

Bill lives in Colorado Springs, Colorado and coordinates the peace group there called Citizens for Peace in Space which has to be the longest standing peace group in the US that is dedicated to space issues.

In 1992 Bill was a co-founding member of the Global Network, along with the Florida Coalition for Peace & Justice where I was working at the time. For some years before that the folks in Colorado, and those in Florida, had worked to support each other since at that time we were the only two grassroots groups in the country consistently working on space.

Bill was once a Catholic priest and during the Vietnam War was arrested for taking a protest into the Air Force Academy Chapel in Colorado Springs. He eventually left the church but today still remains a faithful worker for the poor and for peace.

Bill belongs to a faith and resistance community in Colorado Springs that feeds the hungry, houses the homeless, grows food for their soup kitchen, and holds frequent protests at key Star Wars installations that are located in their city.

Colorado Springs has become a key center for space weaponization. Bases such as Peterson Air Force Base, Schriever Air Force Base, and a host of Star Wars contractors are enough to keep the members of Citizens for Peace in Space busy year round. Each April the Space Foundation holds their annual space symposium which draws thousands to the city to promote war in the heavens. Bill and his fellow activists always hold a creative protest at this event and I've had the pleasure to be a part of it several times over the years.

Bill grew up on a farm in Kansas so it was not a big cultural step for him to begin working with ranchers in Colorado a few years ago who are resisting the expansion of the Army's Ft. Carson military training area into a huge portion of the state's ranch lands. Bill's been able to work with the Pinon Canyon Expansion Opposition Coalition as a peace movement representative showing the normally conservative ranchers that the "peaceniks" are not so bad after all.

Bill's one of the great organizers I've met over the years - steady as a rock, not ego centered, always ready to help others. We are all lucky to have him on our side.
Posted by NO Base Stories of Korea at 11:33 AM