Text Fwd: Clash between labor and government related to KCTWU’s rally is worsening 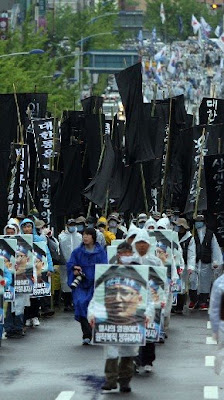 Signs indicate a clash between labor and the government is worsening. Prosecutors have launched a hardline response, seeking mass criminal punishments against the laborers who have been detained in relation to the national rally held on May 16, and labor is responding through strikes.

Labor is protesting that prosecutors and police are suppressing labor in line with the government’s attempt to revise policies in order to gain flexibility in the labor market.

The Daejeon Metropolitan Police Agency announced Monday it had applied for arrest warrants for 32 individuals in connection with Saturday’s labor rally on charges that include assaulting police officers. One of the individuals included Im, 44 years old and a member of the Korea Cargo Transport Workers’ Union (KCTWU). Another 249 individuals were booked without being arrested. One hundred seventy-six of the 457 individuals that have been brought in by police were let off with a warning in the morning, while 249 were booked and freed by 1 p.m. The Public Security Bureau of the Supreme Prosecutor’s Office said in a press release Monday that it would pursue and arrest those it did not capture on Saturday, and would hold those it accused of coordinating the violent protests from behind the scenes accountable.

On the same day, May 16, the KCTU and KCTWU had convened a rally attended by some 15,000 unionists at Nammun Square in front of the Daejeon Government Complex to demand the return to work of delivery drivers fired from Korea Express and the labor rights of ‘specially-employed’ laborers. After the rally, participants conducted a march, during which police moved to suppress the demonstration.

Labor, however, is protesting by saying the situation was created by the police through violent suppression of the demonstration and reckless arrests. At a press conference at the Korean Confederation of Trade Unions (KCTU, Minju Nochong) headquarters in Seoul’s Yeongdeungpo-gu on Monday, they said that the government continues to suppress the unions of specially-employed laborers despite the International Labor Organization’s announcement of the need for an emergency intervention. It warned that it could mobilize a struggle against the government in the form of a KCTU general strike, beginning with Korea Cargo Transport Workers’ Union (KCTWU) and Korean Federation of Construction Industry Trade Unions (KFCITU) strikes in late May. The KCTU said it would announce a plan for negotiations with the government dealing with pending labor issues, including specially-employed laborers’ rights, on Tuesday. If the government refuses to engage in dialogue, the union is prepared to engage in struggle together with political parties and civic groups.

In a national address broadcast on KBS on Monday, President Lee Myung-bak reiterated that securing flexibility in the labor market was an important task that could not be delayed. He said now was the right time to push structural adjustment and reform, and stressed that increasing public sector efficiency needed to accompany structural adjustment. Labor Minister Lee Young-hee said at a press conference Monday that he could not agree with KCTWU’s demands for guarantees of basic labor rights for its members because it is registered as a business entity. In response, KCTU spokesman Lee Seung-chul said the government was unilaterally pushing labor flexibility policies, including the exclusion of labor rights for specially-employed laborers. He said the government’s basic view on labor polices needed changing.

* Related Blog*
http://nobasestorieskorea.blogspot.com/2009/05/text-fwd-excessive-use-of-force-by.html
Monday, May 18, 2009
Text Fwd: Excessive use of force by police during KCTU and KCTWU labor rally