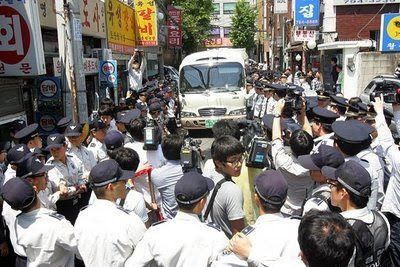 Text in Bruce Gagnon's blog
Sunday, May 10, 2009
KOREAN ACTIVISTS ARRESTED FOR DESIRING REUNIFICATION OF THEIR COUNTRY

Please let me know if you'd like your name (and/or organization) added to the following statement in support of six South Korean activists who were arrested by their right-wing government on May 7 for their efforts to publicly support the reunification of South and North Korea. One of the activists, Choi, Eun-A was on the Korean organizing committee that did such a wonderful job of hosting our Global Network space organizing conference last month in Seoul.

Send me an email at globalnet@mindspring.com if you would like to be listed on the statement which we will send to the South Korean United Nations Mission early this week. Be sure to include your city/state and country.


We, the undersigned, are outraged to hear about the May 7, 2009 arrests and detention of six South Korean reunification activists by their government under the “National Security Law”.

Lee, Kyu-Jae; Lee, Kyeong-Won; Jang, [Min]-Kyeong; Yoon, Joo-Hyung; Oh, Soon-Wan, and Choi, Eun-A should be released immediately and a public apology should be given to these peaceful activists, to their families, and to the people of South and North Korea.

It is our understanding that for many years the Pan-Korean Alliance for Reunification (PKAR) has worked openly to create peaceful dialogue between South and North Korea with the hopes of bringing the country together again in a positive way. We applaud their efforts.

The time has come to end the mindless militarism that continues to divide the Korean peninsula. Those people who work to that end should be applauded for their efforts, not arrested and treated with such humiliation.

Posted by NO Base Stories of Korea at 8:25 PM