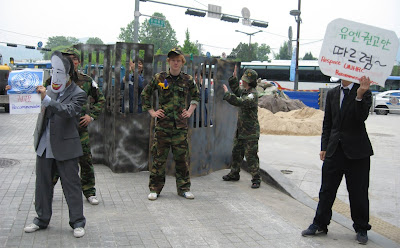 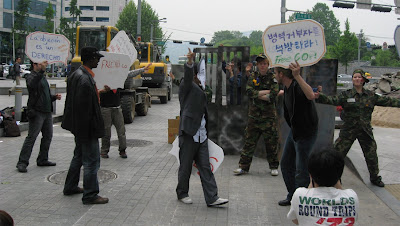 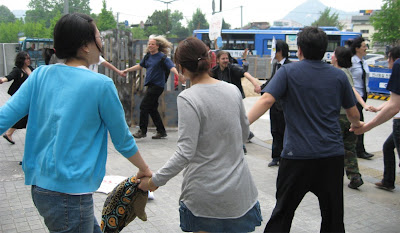 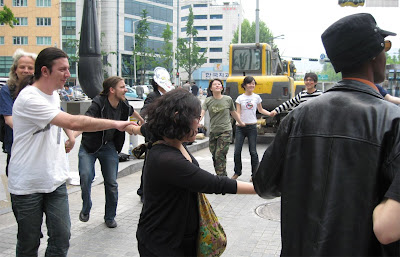 * Image source and description
Street theater on May 15, 2009, satirizing the position of the current South Korean right wing government who submits to the U. S. weapons industry and denies the rights of conscientious objectors despite the recommendation of the UN. The conscientious objectors are eventually freed by the international people’s solidarity for peace. The play ends with the all-together dance with the music of “Power to the People" by John Lennon. A Korean woman activist said that they had to move site to site for play because the police interrupted several times because of its content, despite their original permission. The play beautifully finished in the last site, some remote from the originally planned place but many people could still enjoy it. (No base stories of Korea)

In 2006 the UN Human Rights Committee (UNHRC) recommended that South Korea introduces the right to conscientious objection. In the case of two Korean conscientious objectors the UNHRC has clearly pointed out that the South Korean sentences violate article 18 of the International Covenant on Civil and Political Rights.

WRI and Korea Solidarity for Conscientious Objection (KSCO) will mark International Conscientious Objectors' Day with a non-violent demonstration in Seoul. The demonstration will take place between 12 and 2 pm at Insadong Bukinsamadang, and is a street theatre act[ photos above] . The performance displays the South Korean government's inaction on improving the situation of COs.

Members of the international CO movements will be partaking in the performance as a show of solidarity. People from Europe, Africa and Americas have arrived to South Korea for The Conscientious Objectors' Day. The previous South Korean government had announced preparations for a law recognising conscientious objection. After taking office in 2008, the new government abandoned the plans for a law.

Amnesty International, WRI and other human rights and peace organisations are demanding from South Korea to recognise the right to conscientious objection. In 2007 at least 936 and in 2008 at least 733 objectors were sentenced in the country. In total over 13000 COs have been imprisoned since 1939.

Despite the heavy international condemnation, South Korea continuously sentences all COs to prison. WRI and KSCO stress that COs are not criminals. The South Korean government violates international law and human rights by imprisoning conscientious objectors.

_Conference photos from the World Without War