Text Fwd: Report on the Process of the Illegal Confiscation and Forceful Arrest of the Members of the South Korean branch, PKAR 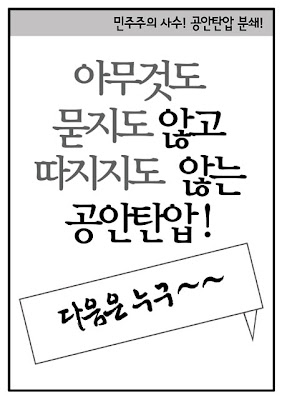 * Image source: PKAR
The top small letters say "Defend Democracy, Smash the National Security Oppression!"
The big letters say 'Ask NOTHING, Discuss NOTHING, That is the NATIONAL SECURITY OPPRESSION_WHO IS THE NEXT?'


-Report on the Process of the Illegal Confiscation and Forceful Arrest of the Members of the South Korean branch, Pan-Korean Alliance for Reunification (PKAR)-

_ The NIS and police security inspection team did the simultaneous and nation-wide (24 places) confiscation against the South Korean branch, Pan-Korean Alliance for Reunification (PKAR) at 6:30am, May 7, 2009 and arrested the 6 people including the chairman, Lee, Kyu-Jae.

_ Lead by the NIS who unusually composed the Joint Inspection headquarter with the Security Inspection Team, the confiscation and forceful arrest was operated with the total force. It seems the preparation and coordination was done more than a year before.

_ Part of the Lee Myung Bak’s policies of anti-NK confrontation and anti-unification moves which denies the 6.15 Joint Statement & 10.4 statement, conducts the NK-SK relationship to the collapse, blocking completely the NK-SK civilian exchange and co-operation; and prohibits the progressive civilian unification movements as illegal.

_ The oppression against the PKAR, a three party solidarity unification movement organization, after the manipulation case against the Practice Solidarity last year is shown as a sign of completely destroying the NK-SK relationship and retroacting it back to the cold war era in the past.

_ As shown in the oppression on May day, May 1 and the 1st candle light anniversary day, May 2, after the compensating re-election, April 29, it is a pre-stopping job intended to weaken the activities of the whole progressive groups struggling against the Lee Myung Bak regime and opposing the vicious MB laws in the temporary National Assembly meeting in June.

_ It is read the Lee Myung Bak regime intends to make a breakthrough in its current crisis which has happened due to its crushing democracy to death, its ruining people’s living, and its destroying of the NK-SK relationship, by cheating the eyes of people through the National Security oppression such as ‘coloring’ and ‘manipulating events’

- The front of the South Korean headquarter office was illegally blockaded by 200 policemen. PKAR Senior Advisor, PKAR staffs, mothers of the Democracy Family Association, seniors of the Tongil Plaza tried to enter into the office many times.

- Right after the confiscation and search, emergency attorney group was composed thru the Democratic Lawyers (Attorney, Cho, Young-Sun and two other people). After arrested being taken, the attorney interview with the 6 arrested were proceeded in the two places of Seoul and Chungjoo

- At 2pm, in front door of the NIS (Naegok-dong, Seoul), ‘Emergent press interview against the confiscation and forceful taking against the members of the PKAR’ was proceed while 50 people from the units participated (Distribution of 2nd Press release and Press interview )

- It was principally agreed to compose a committee against the crackdown of the PKAR (May 8, 4pm, Korean Confederation of Trade Unions). It was decided to discuss at the executive meeting of the pan-Korean committee for the Abolition of the National Security Law.

- The 3 spokesperson statement by each of the Democratic Party, Democratic Labor Party, New Progressive party and statements by various levels and organizations.

- Moving to the PKAR, discussion meeting by Lee-Jong Lin, Honorary Chairman; Kim, Kyu-Chul, Honorary Chairman of the Seoul branch of the PKAR; Noh, Soo-Hee, Chairman of the Seoul branch and the PKAR senior advisors (11am, May 8, 2009). Decides to hold an emergent meeting by the temporary chairs, Seoul branch, PKAR. Decides to defend the PKAR to the last ditch and strongly fight against the security oppression

- The whole meeting by the South Korean headquarter members, PKAR was proceeded. It was decided to transform the organization to the ‘Emergency PKAR committee for the Defense of 6.15 to the last ditch’

_ Report on the process of the illegal confiscation, arrest-taking and the announcement on struggle situation

May 8, at 11 am, Press Interview planned at Wonju

- Attorney meeting with the 3 arrested, at 4pm

May 8, at 11 am, Press Interview planned at Ansan, Kyeonggi-do

-Daeku: Planned suggestion of the meeting to the representative meeting, Daeku, Korean Alliance for Progressive Movement


May 8, 9:30am, plan of the preparatory meeting for the Pan-Civil Society

Confiscation and Search of the PKAR, An Enemy- Benefiting Organization [Konas ]

Government, Activates the ‘New Security Drive’’ - Confiscation and Search of the PKAR , Investigation of the ‘Agora’ member … Focused Investigation through On and Off Lines. [Segye Times]

NIS, Confiscation and Search of the PKAR …Arrest of the Chairman, Simultaneous Operation at the Headquarters and 19 Places… Taking Six People [Hankyoreh]

Posted by NO Base Stories of Korea at 1:29 AM