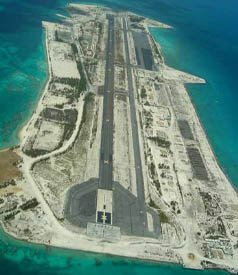 * Image Source/description: same as article below *
'A northeast view of the runway on Johnston Atoll, located southwest of Oahu,
Hawaii. (Photo: Ron Plante)'

* Text informed by Kodep Ogumoro-Uludong, Debbie Quinata and Agatha Haun on May 9, 2009

At the 100-day mark, the new president has tackled an extraordinarily wide-ranging agenda, but one item will need his attention soon: closing the empire of U.S. bases around the world. One place to start is to reverse the marine protection areas that the last president established in the Pacific.

In a last-minute bid to salvage a legacy, President George W. Bush created three new protected marine areas in the Pacific. Environmental groups like the Natural Resources Defense Council applauded. But the situation is more complicated than it looks.

Why would a president who rarely saw a public land or offshore site he didn't want to drill on, and whose climate change policies have done lasting damage to oceans and their inhabitants worldwide, exhibit such concern for marine life in these particular faraway places?

One possible clue: This protective blanket will extend only 50 miles beyond land, rather than the 200 that the law permits. Could it be his real concern was for the land itself rather than for the water around it?

Because these aren't just any Pacific islands. Two - Wake and Johnston - are home to important U.S. military installations, while a huge area of protected ocean encompassing the Mariana Trench borders U.S. military bases on Guam, Saipan, Rota, Tinian, and Farallon de Medinilla. The islands are right now at the receiving end of a major eastward shift in the U.S. military base infrastructure from concentrating bases and troops in Europe and Okinawa, Japan to concentrations elsewhere in Asia and the Mariana
Islands in particular. Guam is set to receive an additional 8,000 Marines
and 40,000 civilians on an island where the military already controls
one-third of all land.

In designating the protected areas, the White House took pains to say that "nothing" in this action "impairs or otherwise affects the activities of the U.S. Department of Defense."

Many in Guam are opposed to the expansion of the military's presence, concerned about increased crime, accidents, violence against women, health and environmental damage, and other forms of social and cultural disruption. And remember too that the islands involved are effectively U.S. colonies without full voting rights and congressional representation and are still on the UN's list of territories slated for decolonization. Whatever else it may do, the marine monument designation will add a positive environmentalist spin to the permanent U.S claim on these territories as military outposts.

But this spin has a problem. Military bases and regular military operations are notorious for their harmful impact on the environment. Such damage includes the blasting of pristine coral reefs, clear-cutting of virgin forests, deploying underwater sonar dangerous to marine life,
leaching carcinogenic pollutants into the soil and seas from lax toxic waste storage and military accidents, and using land and sea for target practice, decimating ecosystems with exploded and unexploded munitions. Guam alone is home to 19 Superfund sites.

It's hard to imagine that the net result of base-expansion-plus-monument-
designation will be good for the surrounding marine life.

In fact, the case of Vieques, Puerto Rico, offers a telling precedent: After locals won a decades-long fight to evict the Navy from their island, the Pentagon was exempted from cleaning up most of the environmental disaster area it left behind when the federal government declared the former base a "wildlife refuge."

How then can these precious resources really be protected? First, and most importantly, the Pentagon cannot be exempted from environmental regulations. Second, full control over Wake Island and Johnston Atoll should immediately be transferred from the Department of Defense to the Department of the Interior - there's no reason that the Pentagon should have its own
private islands. Third, the people of Guam and the rest of the Northern Mariana Islands should be given full control over the areas above and below the water surrounding its territory in full accordance with international law.

To fulfill the Pacific marine reserve's promise of environmental protection and conservation, environmental groups initially enthusiastic about the Bush plan must unite with allies on Capitol Hill and a growing movement of those critical of the Pentagon's expanding reach to press the new administration to reverse this expansion. Those concerned about the
environment must make sure that the Pentagon does not use the mantle of environmental protection as a cover for its profligate and environmentally damaging plans to use military bases to control the Pacific. With around 1,000 military bases outside the 50 states - each one a possible environmental disaster area - now is the time when we should be closing and
consolidating our overseas bases, not finding new and increasingly stealthy ways to solidify their presence.

-------
*Miriam Pemberton is a research bellow at the Institute for Policy Studies. David Vine is assistant professor of anthropology at American University, whose book about the military base on Diego Garcia, "Island of Shame," will be released in May by Princeton University Press. They are both contributors to Foreign Policy In Focus