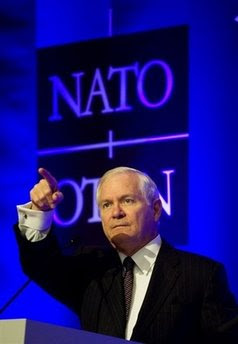 PROTEST TO GREET SECRETARY OF WAR GATES IN BATH, MAINE
May 22, 2009

Peace activists will hold a protest vigil in Bath, Maine on Friday, May 22 beginning at noon in front of Bath Iron Works (BIW) on Washington Street.

Secretary Gates is expected to meet with BIW workers and tour the weapons production facility at that time.

According to Bruce Gagnon, Coordinator of the Bath-based Global Network Against Weapons & Nuclear Power in Space, "The Democrat and Republican politicians will line up to kiss the ring of Secretary Gates. This is what we do in America today - we build weapons of destruction. It's our #1 industrial export product. And when weapons are the number one industrial export product of a nation, what is your global marketing strategy for that product line? War, the more the better. We don't build rail systems, wind turbines, solar systems or other such useful technologies that we need to deal with climate change. But the politicians from both parties understand that the Pentagon has the big money these days so they are on their knees. We think that the time has come for our elected officials to get off their knees and say that we've had enough endless war. The people want health care, full education funding, our infrastructure fixed, and they want to see an end to spending more than $12 billion a month in Iraq-Afghanistan-Pakistan killing innocent civilians."

In a recent article called "The Disease of Permanent War," former New York Times foreign correspondent Chris Hedges writes, "Citizens in a state of permanent war are bombarded with the insidious militarized language of power, fear and strength that mask an increasingly brittle reality. The corporations behind the doctrine of permanent war... must keep us afraid. Fear stops us from objecting to government spending on a bloated military. Fear means we will not ask unpleasant questions of those in power. Fear means that we will be willing to give up our rights and liberties for security. Fear keeps us penned in like domesticated animals."

Activists from all over Maine are expected to attend the protest. The protest will call for the conversion of Bath Iron Works to useful civilian production.

http://nobasestorieskorea.blogspot.com/2009/05/text-fwd.html
Thursday, May 21, 2009
Text Fwd: Government announces a ban on assemblies in Seoul
Posted by NO Base Stories of Korea at 12:42 PM