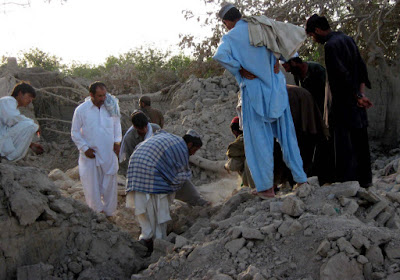 * Image Source/ caption: informed as below

'Villagers search for the bodies of their relatives after U.S. airstrikes in Ghanj Abad of Bala Buluk district of Farah province May 5, 2009. Dozens of people, including women and children, were killed in U.S.-led airstrikes while sheltering in homes from a battle on May 4-5 in western Afghanistan, the International Committee of the Red Cross said on May 6. (Xinhua)'

The government announced on Tuesday that it would send an additional 60 personnel for a Provincial Reconstruction Team (PRT) for reconstruction efforts in Afghanistan, increasing the members to 85, including the 25 who are already in the country. The scale of South Korea‘s aid will also be expanded to 74.1 million from the 30 million dollars that had already been committed over a period of the next three years.

In a cabinet council meeting on Tuesday, the government settled the revised assistance package for Afghanistan. The additional dispatch of PRT personnel serves as the backbone. The government approved 19.5 million dollars be paid out of the reserve fund to build a hospital and job training center in which the new additional PRT personnel will work.

The 60 new additional personnel will consist of 30 medical assistance personnel, 12 Taekwondo training coaches, and 10 computer, automobile, electricity and construction teaching personnel. Former and currently serving police officers will be sent as Taekwondo training coaches for Afghanistan police training. The authorities of the Ministry of Foreign Affairs and Trade say, “If the hospital and job training center can be built before the end of the year, we will dispatch medical aid and job training teams starting next January.”

The government has also decided to provide 5 million dollars worth of equipment including 300 police patrol auto-bikes and 100 ambulances. The government will send equipment to Afghanistan in late July. The government is considering contributing additional assistance to Afghanistan beyond the content of the revised assistance package announced on Friday. However, if the government decides to dispatch troops to Afghanistan again while expanding the funding of reconstruction for Afghan, it would be criticized for engaging in a diplomatic policy towards the U.S. that has no practical benefits.


Please direct questions or comments to [englishhani@hani.co.kr]
Posted by NO Base Stories of Korea at 5:45 AM