Text fwd: Letter from a Unification Activist in Detention 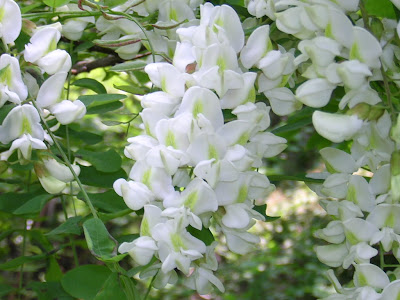 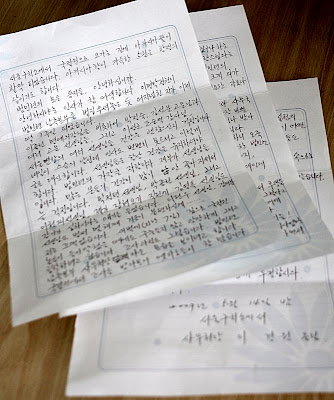 The letter in photos above are by Lee, Kyeong-Won (45), Secretary of the South Korean branch, PKAR and an unification activist, one of the arrested on May 7 by the National Intelligence Service, South Korea, under the charge of the National Security Law. The date was on May 14 when Bruce Gagnon, Secretary/coordinator of the Global Network against Weapons and Nuclear Power in Space sent the international solidarity statement & petition to the Korean consulate in the New York, protesting against the South Korean government’s arrest of the six PKAR activists.

*Image source and Translation of the letter from
the South Korean branch, Pan-Korean Alliance for Reunification (PKAR)site

" The acacia flowers blossomed on the road between the Seoul Detention Center and the National Intelligence Service. The May filled with the scent of acacia is the Month of the Uprising as well.

Hello, all the comrades in the PKAR.
It is so clumsy to say hello. It has exactly been a week that the Lee Myung Bak regime has messed the South Korean branch, PKAR.

I am afraid whether the health of Lee Jong-Lin, Honorary chairperson, Park Jung-Sook, Kim Sun-Boon, Counselors and other counselors and Lee Sung-Keun, Cho Soon-Duk, supervisors and all the masters in the Seoul branch are O.K.

Tomorrow is the “Teacher’s Day” but I replace my greetings with writing. You should keep your health. The most pride and asset of the PKAR are you, masters.
I have always been afraid of your health as many of you have become ill.

I am keeping strong. When the guys of the NIS invaded my house at last dawn on May 7, I tried my best not to feel small but to keep dignified and sober. It was same during the investigation process. I intended to show the very posture as the secretary of the South Korean branch of the PKAR.

There were so many old [PKAR] materials while I was investigated in the NIS. I thought how so many works we have done seeing the materials. I was dignified and proud of the PKAR.

How hard you would feel to struggle against the oppression with other struggles: The grand march of the South Korean branch of the PKAR; May 17, the 29th anniversary of the Kwangju uprising; June 15 event; and Reunification Furnace 1000 ℃! You would be so out of mind so I am sorry not to speak able to something. But I trust my PKAR comrades and I would do my own struggle here.
[…] The victory is when you show the persistent struggles when the situation is difficult. Let’s gather our power and fight stronger.

Comrades in the local areas. Let’s gather our power. The organizing is harder when you do only organizing in this situation. We must counter the oppression, struggle against it and strengthen our organization.

Even though I am keeping my right not to speak, I am thinking of how to counter-attack this oppression [during the investigation]. It looks like the core of the investigation direction is to manipulate my case as the spy event.

Talked many things with the lawyers.

I received the letter from the secretary of the Kyungin branch. Nowadays, the letter is easy through internet. Once the email is shown, I print it and bring to my room. Though it is the one-way internet, it has become so convenient. It is my first letter. So many things to say but I stop here.

Let’s fight as the members of the PKAR whether we are here or there.
Wish you all the fighting.

Lee, Kyeong-Won,
Secretary of the PKAR,
From the Seoul Detention Center


* Mr. Lee, Kyeong-Won is a father of Lee, Kang whose letter to him was introduced here.

Posted by NO Base Stories of Korea at 4:35 PM