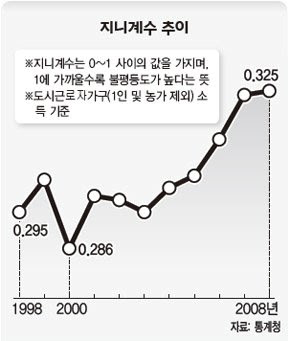 http://english.hani.co.kr/arti/english_edition/e_business/356266.html
Gulf between rich and poor in South Korea widens: The Gini coefficient reached an unprecedented high in 2008, and experts expect further deterioration due to an increase in economically inactive people
Posted on : May.22,2009 12:07 KST Modified on : May.22,2009 12:37 KST


The Gini coefficient, a comparative assessment measure of inequality of income distribution, reached an unprecedented high in 2008, indicating a widening gulf between South Korea’s rich and poor.

Based on the index of income distribution released by the National Statistical Office (NSO) on Thursday, the Gini coefficient of urban households stood at 0.325, the highest since 1990 when the NSO first started to release related statistical data.

Experts interpret the reasons for the increase in the Gini coefficient includes the fact that one sector of South Korea has enjoyed the economic conditions caused by an increase in security and real estate prices, while others have suffered from high unemployment rates.

Yu Kyung-jun, a researcher at the Korean Development Institute says, “South Korea will experience the further worsening of the Gini coefficient due to an increase of people who are economically inactive.”