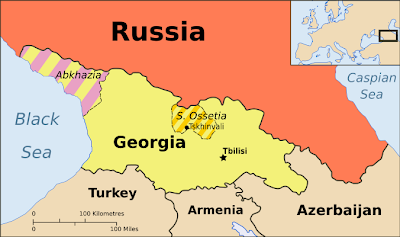 The run-away-train called Georgia is at it again poking a stick at Russia. V-P Joseph Biden will visit there this week and the New York Times is reporting that Georgia intends to invite the US to send troops to help patrol the borders near the conflicted breakaway republics of South Ossetia and Abkhazia. You might remember that last summer Georgia attacked Russian peacekeepers in those two republics and a hot war ensued. (South Osseti and Abkhazia want to be autonomous - Russia long ago has recognized them and Georgia has not.)

A member of the Georgian National Security Council told the Times, that US troops in the conflict zone would make it “politically very costly to Russia to do anything on the ground.”

The newspaper went on to report, "Mr. Biden intends to make it clear, on this trip, that the United States will not abandon its allies in deference to Russia, said one of his senior advisers."

If you are thinking - "Gee, would this be the equivalent of Canada inviting Russian troops to set up shop right along the border with the US?" - then you are indeed right on the money. It's a chess move but an extremely dangerous one at that. During the Cold War this would have been the spark that would have ignited nuclear war between the two superpowers. Today the US arrogantly thinks it can get away with such moves without a hitch.

This all could be a trial balloon. But it appears the US is determined to use the Georgia-Russia border to continue to sow seeds of disharmony in the region. Please remember that I've previously written that the Rand Corporation a couple of years ago suggested that Russia should be broken up into three separate countries so the US-British oil corporations would have an easier time getting their hands on Russia's supplies of natural gas - the most in the world by the way. The US and NATO "balkanized" the former Yugoslavia and while in the Senate, Joseph Biden, suggested we break Iraq up into three countries for the same purpose of easier control of their oil. There is a dangerous pattern at work here.

So what will happen to the US-Russia nuclear negotiations if Obama first moves to put US troops on the Georgia-Russian border? Fa-get-about-it!

By the way, did you happen to notice that pesky little Caspian Sea popping up again in the map above? What could be going on here?
Posted by NO Base Stories of Korea at 5:32 AM