The Three Unification Activists Got the First Trial 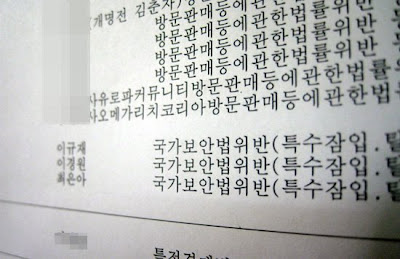 * Image source/ description :
‘The first trial for the [three] staffs of the PKAR, South Korean branch opened at the room NO. 424m at the Seoul Central Distict Court, in the afternoon of July 17 (photo by a reporter, Ko, Sung-Jin, Tongil News)’

* One can see the three names of Lee, Kyu-Jae, Lee, Kywong-Won and Choi, Eun-A with the list of charge applied to them, national security law, at the bottom of the photo.

* Source informed at the PKAR site

* Below is the unofficial translation of the original Korean article

“The Judgment of the Unification Movements in the [Ex-President] Roh Moo Hyun Era."
:The First Trial of the ‘PKAR Case’ opened…About 100 People from Various Fields Cheered [the Accused].
July 17, 2009 by Koh, Sung-Jin, kolong81@tongilnews.com

In the first trial of the three [unification activists] including Lee, Kyu-Jae, the chairman of the Pan-Korean Alliance for Reunification (PKAR), South Korean branch, held at the Room No. 424 at the Seoul Central Distict Court, Seocho-Gu, Seoul, 2pm on July 17, [2009], Cho, Young-Sun, attorney at law, the counsel for the accused, spoke as such, appealing the fair judgment by the judges.

The attorney, Cho lodged the doubt, “ It is suspected whether it has the political character or not that the evaluation of the civilian inter-Korean interchange within the legal space under the Roh Moo Hyun government for five years has suddenly become the problematic as the Lee Myung Bak government launched.”

It is for the bringing forward the question on the labeling the suspicion of the ‘being directed by order from [the North Korea] to the civilian inter-Korean interchanges, problematized under the national security law, despite the fact that those have been approved by the Ministry of Unification from November, 2004 to 2007. It is the reason why this trial has gotten attention.

Lee, Kyeong-Won, Secretary of the PKAR, South Korean branch, [one of the three accused] saying, “ Didn’t the prosecutors indict [us] for the time because the National Intelligence Service (NIS) had known all the contents of the dialogue record by the its enforcing of the search for all the emails in 2004, 2005 & 2006 and because there was no obvious proof of violation that [our activities] were against the safety of the national existence or the order of the liberal democracy, did it?”, emphasized in his opening statement that the [PKAR] inter-Korean interchange activities were progressed under the legal process.

Next, he refuted the contents of the indictment by the prosecutors that “It is impossible to say it as the violation of the National Security Law as [the communication] with Park, Yong, Vice-Secretary of the Joint Office, the PKAR was in fact, public as the Joint Office had been the wiretapped. ”

Choi, Eun-A, Chief of the Publicity team of the PKAR, South Korean branch and another accused also criticized in her opening statement that “ It is implausible that the very same people who have legally approved the civilian inter-Korean interchanges when the inter-Korean relationship had gradually changed and the policies had been reflected into them, now claim, to shame on their faces themselves, that those are the illegal activities as the government was changed.”

Lee, Kyu-Jae , Chairman of the PKAR, the last accused, South Korean branch also raised his voice that “ The measure of the National Security Law has been differently applied according to the changing governments. On same cases, the Roh Moon Hyun government legally permitted us to trip back and forth to the North Korea but now the Lee Myung Bak government is arresting us” “ I can hardly erase the suspicion that the [government] is trying to manipulate the national security case to overcome its crisis, as I see that [the NIS] has waited for five years under the same condition even though it could arrest us five years ago [if the NIS had wanted]”

“ There is no clear point of practical harm that would influence the whole society.”

[In the trial], the point whether the PKAR is the enemy [North Korea] –benefiting organization or not was dealt with beside the controversy of the applying the national security law to the ‘legal civilian inter-Korean exchanges’.

So to speak, it is the point whether the principles, rules, and activities of the PKAR who aims those have the provable harm ness to the whole society.

Attorney at law, Cho, Young-Sun saying, “ The prosecutors have to clearly explain the relationship of the cause-result of how the fact that the logic of the PKAR is same with the North Korea is dangerous to the whole society.”, claimed that “There is no clear point of the harm that would influence the existence of the national safety and the order of the democracy .”

Choi, Eun-A, Chief of the Publicity team of the PKAR saying that “According to the logic that we have praised, followed, encouraged [the North Korea], only by the fact that our logic is similar to that of the North Korea, then the Hyundai Asan, [a South Korean conglomerate] who built the Kaesong Industrial Complex [in the North Korea] should be said that it is by the order of the North Korea, as well.”, also explained that “There was no unilateral way of communication from any side.”

Beside above, the [three] all repeatedly criticized through all their opening statements that the National Security Law is the vicious law whose application measures have been ambiguous & willful and which have been abused by the conservative powers to maintain their vested rights.

Attorneys at law, Request the Lift of the Freezing of the Bank Account of the Chairman, Lee, Kyu-Jae
: Civil Society, “ We Will Request Park, Yong, the Vice-secretary of the Joint Office of the PKAR to Be the Witness for the Court”

The attorneys at law also requested the lift of the freezing of the bank account [of the PKAR], saying all its bank transactions have been stopped after the Supreme Prosecutors’ Office, Seoul branch, froze the bank account named of the Chairman, Lee, Kyu-Jae on last June 3.

On this first trial day, about 100 people from the various fields entirely filled the court room. They cheered [the three accused] while greeting one another, asking after one another’ health.

The next trial will be reopened on August 21, from 10am to 6pm. The judges said that they choose the date, considering that it would require the preparing days for the intense examination and announced that it would open the court every Friday for the case after August 21.

In advance the trial, the ‘Civil Joint Committee against the Oppression of the PKAR’ had the press interview at the office of the Lawyers for a Democratic Society, Seocho-Gu, Seoul, saying “We intend to aggressively prove the legal activities of the PKAR “ and disclosed that “ We, despite all the hardships, will request many staffs in the office of the PKAR, North Korean branch and Park, Yong, the Vice president of the Joint office of the PKAR to be the witness at the court room, South Korea,”.

As matter of the suspicion of the ‘being directed by order from [the North Korea], the committee also fixed the factual point that “So called ‘directing order’ means that the relationship between the director and the directed is straight and vertical. However, the relationships among the branches of the South Korea, North Korea, overseas, PKAR are not higher-lower but those of the equal."