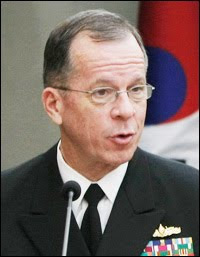 A top U.S. military commander hinted that U.S. troops stationed in South Korea could be temporarily deployed to the Middle East in the coming years.

Won Tae-jae, spokesman for South Korea's Ministry of National Defense, said the two governments have not discussed any troop redeployment, adding his ministry is checking the comments made by Adm. Mike Mullen, chairman of the U.S. Joint Chiefs of Staff, on Oct. 22 in Seoul.

According to the Stars and Stripes, a military newspaper in Seoul, Mullen told U.S. troops during a town hall meeting in Seoul that the U.S. Department of Defense was discussing whether to deploy troops stationed in South Korea to the Middle East.

The remarks have caused controversy over the ``strategic flexibility'' aim of the U.S. Forces Korea (USFK).

Strategic flexibility is aimed at changing the mission of American forces abroad from stationary ones focused on defending host nations to rapid deployment troops that can be swiftly dispatched to other parts of the world where the United States faces conflict.

Seoul and Washington agreed on the scheme in 2006, but the plan has not been fully implemented amid concerns that it could weaken the Korea-U.S. combined forces against North Korea.

``That's something we're looking very specifically at,'' the admiral was quoted as saying. ``We really haven't closed on whether it's going to be one way or the other.

``The concern that gets raised with respect to rotating forces out of here is that it lessens the commitment to the alliance and the Republic of Korea, and nothing could be further from the truth.''

The USFK has pushed ahead with a plan to lengthen the tours of U.S. troops here and have them live with their family members as part of ``tour normalization'' efforts.

USFK Commander Gen. Walter Sharp said earlier that his command would have one-half of its 28,500 members serve three-year accompanied tours, similar to those served by soldiers, sailors, airmen and Marines in Japan and Europe for decades.

``The timing of that will depend on how fast we can build the schools and housing to accommodate the increased population,'' Sharp told U.S. journalists.

The second phase is scheduled for 2011-2016, and will involve moving forces from Yongsan Garrison in Seoul and the 2nd Infantry Division posts north of the capital into Camp Humphreys in Gyeonggi Province.

gallantjung@koreatimes.co.kr
Posted by NO Base Stories of Korea at 4:05 AM