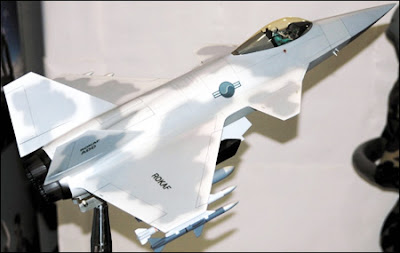 A model of the KF-X fighter jet

Saab, a Swedish defense firm, is being investigated here over alleged illegal lobbying of a defense research institute affiliated with the National Assembly regarding a South Korean fighter development program, sources said Monday.

Prosecutors recently raided both the firm's branch office and the headquarters of the Security Management Institute (SMI) in southern Seoul to seize documents and computer files as part of its three-month investigation into their alleged connection, the sources said.

Prosecutors have also traced the bank accounts of Saab officials and the SMI president to uncover alleged financial transactions between the two sides, they said.

SMI has served as an influential research agency regarding major South Korean arms acquisition and development programs since it was established as an advisory agency to the Assembly in 2005.

It was also designated by the Defense Acquisition Program Administration last October as an agency for studying weapons programs, cost analyses and defense technology development plans.

"The prosecution has almost completed its investigation of Saab and SMI and is closely analyzing confiscated material," a source told The Korea Times on condition of anonymity.

"It is a rare and intensive probe into a foreign defense firm and is expected to affect future arms improvement programs involving foreign manufacturers, depending on the results," he said.

Prosecutors said SMI was suspected of having offered classified information on the KF-X indigenous fighter development program to Saab or written up parliamentary documents on the KF-X partnership in favor of the Swedish company, in return for compensation.

A Saab official declined to comment on the issue, while an SMI representative denied the allegation and argued the investigation was merely a routine inspection of the parliamentary advisory institute.

"This incident may deal a blow to Saab in its ongoing and future businesses," the source said, adding the firm is considering cancelling its participation in the Seoul Air Show slated for Oct. 20 to 25.

In a related move, the Defense Security Command investigated the state-funded Agency for Defense Development earlier this year over a possible information leak to Saab, which was conducting a joint feasibility study on key arms development programs.

Saab has engaged in various weapons procurement projects in the country, such as the integration of a naval radar system and the export of its artillery-detecting radar system.

The KF-X project, aimed at creating an indigenous combat aircraft in partnership with a foreign aircraft giant to replace the Air Force's older F-4s and F-5s, has drawn proposals from major Western fighter houses.

Saab has been among the most active bidders by offering a new design for a super-cruising stealth fighter. It also asked South Korea to join its Gripen next-generation program to forge a broader fighter development partnership.

Other foreign manufactures that have shown interest in the KF-X include Boeing, Lockheed Martin and Eurofighter. The KF-X has been controversial, however, since many defense analysts see it as unviable economically and technically.

The KF-X was cut again in next year's defense budget proposals submitted by the Ministry of National Defense earlier this month.

The Weapon Systems Concept Development and Application Research Center of Konkuk University commissioned by the government to examine the feasibility of the KF-X is known to have suggested lower operational requirements for the new fighter jet.

In its interim report revealed earlier this year, the center recommended a plan to produce about 250 F-16-class fighters after 2010 with the help of foreign firms.

The center asked foreign firms about their views on the per-plane cost estimate of $50 million, as well as budget-sharing ideas and technology transfer.

In a 2007 feasibility study by a local economic policy think tank, the KF-X project was assessed as unsound economically as it would cost at least $10 billion, but would reap only $3 billion in economic benefits.

gallantjung@koreatimes.co.kr
Posted by NO Base Stories of Korea at 5:41 AM