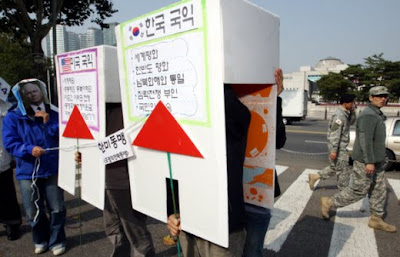 * Image Source/ caption: Same as below
"Members of Solidarity for Peace And Reunification of Korea hold a demonstration against the Lee administration’s plan to dispatch troops to Afghanistan in front of the Defense Ministry Building, Oct. 27."


The Lee administration and ruling Grand National Party (GNP) provisionally decided Thursday to redeploy an estimated 200 troops and 50 policemen to Afghanistan. They will make a final decision on the size of the dispatch and unit composition after a government study team is sent next month to verify local conditions. With the Democratic Party (DP) in opposition to the plan to redeploy troops, political controversy over the deployment to Afghanistan is expected.

In a meeting with the Grand National Party and Liberty Forward Party on Thursday, Foreign Minister Yu Myung-hwan explained the Lee administration plan to send additional economic aid and resend troops to Afghanistan. Yu reportedly explained the need for a large increase from 25 to 130 in civilian Provincial Reconstruction Team (PRT) personnel, and the necessity of sending around 200 troops and 50 policemen to protect them. The PRTs are multinational civil affairs teams, working under the leadership of the U.S. State Department, sent to help in the reconstruction of local governments in Afghanistan.

In particular, Yu explained a plan to combine the boosted PRT personnel and troops in order to independently operate one of the three Afghan provinces that have yet to receive a PRT. Currently, the 25 PRT personnel, who are engaged in local job training, have been working within the U.S. Bagram Air Base located in northwest Afghanistan. Jeong Yang-seok, a chief of the Secretariat of the GNP’ Chairperson, said the Lee administration justified its position for dispatching more PRT personnel by saying South Korea’s contribution in Afghanistan should be in accordance with its national power and international prestige.

However, analysts say if South Korea decides to operate a PRT independently, concern for their safety will rise together with an increase in military burden to defend them from attacks by the Taliban, especially as the local situation grows more dangerous by the day as evidenced by a suicide bombing in the capital of Kabul that killed a United Nations staff member.

Meanwhile, Defense Minister Kim Tae-young spoke on the matter in a National Assembly National Defense Committee meeting Thursday and acknowledged that they while the additional troops would defend PRTs from attacks, unavoidable firefights could happen and casualties could be a result. He added that one cannot exclude the possibility, too, of Taliban or al-Qaeda attacks on South Korean expatriates living in regions outside of Afghanistan.

Minister Yu is scheduled to explain the government plan for economic aid and troop deployments to Afghanistan to the DP on Friday to address questions regarding the deployment of troops and an increase in PRT personnel. Speaking to reporters on Wednesday, DP Chairman Chung Sye-kyun said the DP has not yet formed a party position, but acknowledged that the currents within the party were strongly negative. Chung said the South Korean government had previously sent troops but withdrew them, and there is no need to redeploy them now. Accordingly, it appears that the deployment to Afghanistan could become a matter of political contention.

As for the timing of the deployment, because it will take slightly over a month to put a unit together and give them the training required to perform their duties on the ground following parliamentary approval, analysts say any deployment would not take place until the end of December at the earliest, or January of next year at the latest.