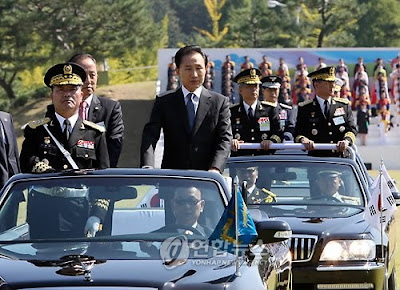 ``Our military should not neglect efforts to cope with the world's fast changing security environment,'' the President said in a speech at a ceremony to mark the 61st anniversary of the founding of the nation's armed forces. The ceremony took place at the Gyeryongdae military compound in South Chungcheong Province, attended by some 3,200 incumbent and former military leaders, war veterans and citizens.

``North Korea's threat is becoming more diverse, and new global threats, such as terror and piracy on the open seas, are on the rise. And the international community's expectations for our country and military has also increased,'' Lee said.

To satisfy these needs, he added, South Korea's military should be developed and overhauled further to become an advanced military capable of playing diverse roles at home and abroad.

Lee referred to Seoul's hosting of the G20 summit next year as an example of the country's ever-upgraded global status.

``The hosting of the G20 summit reflects that South Korea now stands in the center of the global stage beyond the Asian region,'' he stressed.

South Korea has dispatched thousands of troops to Iraq, Afghanistan and other regions as part of a coalition of peacekeeping member states.

Currently, about 350 troops are stationed in Lebanon as part of United Nations forces there. Hundreds of other naval seamen are also conducting anti-piracy operations off the coast of Somalia.

The President reaffirmed a stronger posture against North Korea, which has been constantly developing its asymmetrical military capability.

``I want to make it clear that our values and principles (of the security on the peninsula) will remain unchanged despite the need for dialogue with the North,'' he said. ``Our military should not be swayed by any outside factors. When our military readiness is firm, the chance for inter-Korean dialogue and peace will come earlier.''

The ceremony included a parade by the honor guards of the three military services, the conferment of medals to war veterans, and a performance of military arts and tactical sky diving.

Also included is a ceremonial flight of 21 helicopters, including AH-1Ss and UH-60s, and T-50 supersonic jets.

Under the Defense Reform 2020 package initiated in 2005, the number of South Korean forces will be downsized from the current 650,000 to 520,000 in stages. Instead, the military plans to introduce more advanced weapons systems to offset the decrease in troop levels.

gallantjung@koreatimes.co.kr
Posted by NO Base Stories of Korea at 8:21 PM