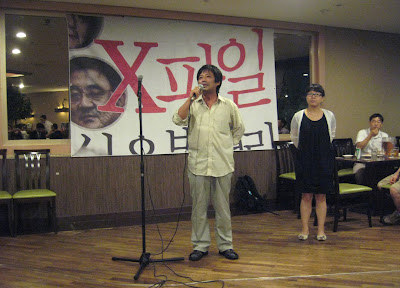 Mr. Kim, Seong-Hwan does a speech appealing for the workers who have gotten leukemia as the industrial damage at the Samsung SDI factories, at the event of the anniversary of the fight against the Samsung X File (2005), sponsored by the former congressman, Mr. Roh, Hwoi-Chan, on Sept. 5, 2009. About 22 workers at the Samsung SDI have gotten leukemia and 11were dead. He has also said against the Samsung’s 'no union' policy, oppression of its workers such as threatening to kill and monitoring their phones. Mr. Kim, Seong-Hwan has been jailed many times himself, accused by Samsung under the charge of the “dishonoring’ and ‘intervention’ of Samsung affairs. 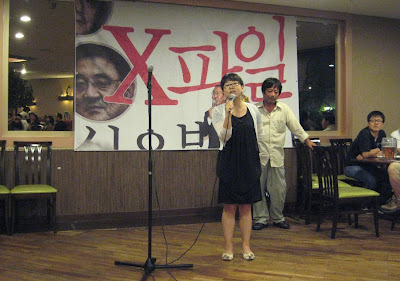 Ms. Jung, Ae-Jung, a former Samsung SDI worker has also lost her husband who had been a Samsung SDI worker as well and survived by his wife and two children. She said many woman workers in the Samsung SDI suffered for the sterility and any other unexplainable diseases. She said that the Samsung SDI had not explained about what the chemical the workers really handled with and there was no safety guide about them during their works. 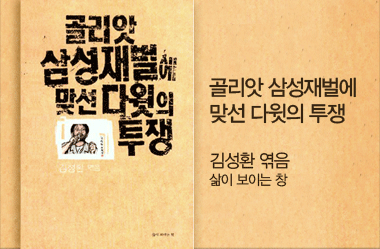 Image Source: Mr. Kim, Seong-Hwan has collected the articles of the struggles in a book called, “ The Struggle of David against the Goliath Samsung” in jail and has been selected as one of the conscientious prisoners by the Amnesty International. In fact, many of the conscientious prisoners are the workers in the South Korea. The number of the workers in the labor movement in jail have been dramatically increased under the right wing government, Lee, Myung-Bak.

* Below is the unofficial translation of the writing (at the bottom)by Mr. Kim, Seong-Hwan, chaiman of the Samsung General Labor Union who sent the email on Oct. 3, 2009, asking to let the facts below known to the world.

* Samsung is one of the leading Korea Aerospace industry companies as well. Samsung make many weapon and weapon systems such as K-9 Self-Propelled gun and net-centric system in the Aegis destroyer. It is also involved in the infamous redevelopment program in Yongsan where 5 tenants were killed by the police during the struggle in January, 2009.


Samsung, Acknowledge the Leukemia as the Industrial Damage Disease!

I could not stand when I heard the news of the relapse of the Leukemia of Ms. Park, Ji-Yun, Leukemia victimized Samsung Semi-conductor worker. I ran to the headquarter building of the Samsung, Gangnam station as soon as a picket was made. I did a one-person protest to cry that Samsung should make live Park, Ji-Yun and acknowledge the leukemia as the industrial damage.

“Pray for the good recovery of Park, Ji-Yun, a Leukemia-victim of Samsung semi-conductor!”

“Samsung conglomerate, acknowledge the Leukemia as the industrial damage disease!

With the burst of indignation from the heart of so much chagrin, rage, I felt as if it was a crime if I did not do something. Following my heart, I made a picket and had a one-person protest.

While doing that, I looked upon the sky from time to time and found how truly high the Samsung building was, as if it pierced the sky. Wasn’t that the building made by the blood, tear and lives of thousands, of 10 thousands’ workers, was it? Furthermore it was such a painful torture that there was a fading life of a 23 year woman worker, Park, Ji-Yun, in front of our eyes and a parched heart of her mother who had to watch her daughter faded beside her.

After the one-person protest, I visited her mother at the Sungmo (*meaning St. Maria) hospital, Gangnam, with Ms. Lim, Mi-Young, Secretary of the Sponsors for the Conscientious Prisoners but what I could say? When the life of her daughter could not be guaranteed, saying how out of mind to think of her daughter who would suffer for the anti-cancer cure, she said if her daughter could not eat, she could not eat, either. From yesterday, she could only eat the rice soup that her daughter left and a cup of noodle that she thought, if not, she could not keep her daughter’s life. The secretary of the Sponsors for the Conscientious Prisoners could only tear without being able to say any words of console to her mother who crosses the border between life and death many times with her daughter a day.

However, we should find the ways we can do for the fading young life and fight for her!

We should let the world know why the young woman worker had to get the leukemia at such young age, to suffer, and to become dying without knowing any reasons; why the young twenty two woman and man workers got the Leukemia at the Samsung Semi-Conductor and 11 have been dead among them.

We should know that despite many informing by the victimized workers as time goes as this year, the Korea Occupational Safety and Healthy Agency (KOSHA) and the Korea Workers Compensation and Welfare Service (KCOMWEL) who have fallen down as the agent of the Samsung capital would never respect the workers dead and workers in beds for leukemia as the industry warriors and would not recover their honors, acknowledging their disease were for the industry damage.

Thus, we must let that fact known to the conscientious groups and people this society and to the world, even if our necks might burst and crack. Even though the facts that, in the factories of the Samsung Semi-Conductor, the super-rate coperation, 22 workers have gotten the leukemia and 11 were dead, the Samsung chaebol and Lee Myung Bak government had not said any responsible words; even though a young 23 year old woman worker, Park. Ji-Yun is now fighting with death in the bed of the Sungmo hospital, Gangnam, Seoul, by the relapse of the leukemia, the Samsung chaebol is yet ignoring the searching examination of truth, condemning to say that the happening of leukemia among workers is for the individual disease and only busy for hiding the truth with their bloody colors in face.

It is our responsibility to strengthen the international solidarity, to make the conscientious groups & people this land to fighter together so that they feel it is their moral responsibility and voluntary fight.

While the Samsung, self-proud of the 1st coperation of the South Korea, through the illegal & violent oppression on the workers, called ‘No Union Policy’ which violates the Constitution, trampling down the freedom of organizing and right of working in healthy condition, conducting any anti-social illegal crimes only for the profits for the inheritance management by the small families, our struggles against the Lee family of Samsung are just.

The issue whether the leukemia in the Samsung Semi-Conductor is industry damage or not does not matter anymore.

It is foolish as waiting for the new leaves coming out from the rotten old tree to beg the acknowledgement of the industry damage of the leukemia, and to expect any human care and consciousness from the KOSHA and KCOMWEL, the so-called specialist groups who abuse the workers' lives by humming the rhetoric of the scientific and medic relationship between the Samsung Semi-Conductor site and leukemia and who dance by the rhyme of the Samsung Chaebol.

Now, what matters is that the leukemia is not any more the individual suffering and death but the matter of the existence and consciousness of this society.


# Let’s have a candle rally and one-person protest together;

___The candle rally is done everyday between 5 to 7pm, in front gate of the Sungmo hospital, Gangnam, Seocho-gu (Back of the Gangnam terminal) from the date of Oct. 5

___The one-person protest is done on the pedestrian street, at the exit 4, Gangnam station. The choice of the hours is volunteering and we are waiting for many applications.

# Please send the letter of support and encouragement praying for Ms. Park, Ji-Yun;