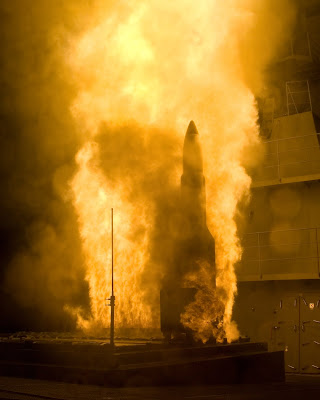 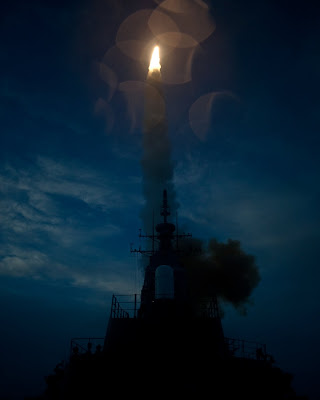 Japanese SM-3 Block 1A missile launch from the JS Myoko

Against the early evening clear sky off the coast of Kauai, Hawaii the Japanese Kongo class destroyer, JS Myoko detected, tracked, and launched an SM-3 Block 1A missile, obliterating a target ballistic missile, unequivocally demonstrating their capability to destroy any currently deployed North Korean ballistic missiles threatening the people of Japan. This milestone event marks the debut of the third Japanese Kongo Class Destroyer with ballistic missile defense capability that will patrol and defend the seas surrounding Japan against the threat from North Korea to their homeland. Having three Aegis-equipped ships with ballistic missile defense capability allows the defensive forces of Japan to patrol and protect the people of Japan, continuously 24 hours a day and seven days a week.

CLICK HERE TO SEE BREAKING VIDEO AND PHOTOS OF THE TEST
This also marks the first successful Aegis missile defense intercept of President Obama's "new missile defense architecture" announced on September 16th of this year. The cooperative efforts with the Japanese government on the Aegis missile defense system are a major emphasis on the President's new missile defense plan. The Japanese are full and equal co-developers of the SM-3 Block 2 missile, which is the highly-preferred, 'end all' defensive missile, by the Department of Defense that will defend Europe and the US homeland under this Administration's promise to defend our nation against Iran by 2020.

Like their legendary ancestral forefathers, the Samurai warriors, the Imperial Japanese Navy officers and sailors showed incredible precision to strike down cleanly and exactly an incoming threat, once again proving their ability to protect their sacred homeland. The manner in which they performed brought much honor to the crew of JS Myoko in showing their ability to uphold the first line of defense of their country.

Ganbatte to our Japanese friends.

Click Here to learn more about MDAA
Posted by NO Base Stories of Korea at 7:38 AM