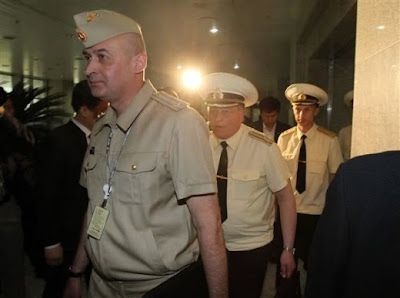 A document shows that the Russian investigation team that came to Korea from May 31 to June 7 to conduct its own investigation into the sinking of the Cheonan concluded that the sinking resulted from an "indirect outside underwater explosion," but that the blast was more likely from a mine than a torpedo.

On Monday, the Hankyoreh acquired a document titled "Data from the Russian Naval Expert Group's Investigation into the Cause of the South Korean Naval Vessel Cheonan's Sinking," in which the Russian team stated, "The explosion time officially stated by South Korea [9:21:58 p.m.] does not coincide with the time of the last video footage taken on the day in question when the power current was cut off within the vessel [9:17:03 p.m.]." This statement hints that an uncontrollable situation may have arisen at least four to five minutes before the time announced by the South Korean team.

The Russian team also said that a sailor on board the Cheonan made a cell phone call at 9:12:03 p.m. notifying a Naval signalman that crew members were injured. "The record of this first communication does not accord with what was official stated by South Korea," the team said. This coincides with a July 8 Hankyoreh report stating that the Russian team had "detected the transmission of a distress signal at a time earlier than the time of the Cheonan explosion."

The Russian team also raised questions about the so-called "No. 1 torpedo" fragment presented by the South Korean team as "conclusive evidence" of North Korean responsibility for the sinking. "While the torpedo fragment may have been made in North Korea, the characters written in ink do not conform to general standards" in terms of location and lettering, the Russian team said. The Russian team went to say, "Based on a naked-eye analysis of the torpedo fragment presented, one could believe that the fragment had been underwater for six months or more." Previously, the South Korean team announced that a naked-eye analysis of the degree of corrosion indicated that the torpedo debris had been underwater for around one to two months.

Regarding damage to the Cheonan's propeller screws, the Russian team wrote, "Since before the time of the disaster in question, all five of the right-side screw wings and two of the screw wings on the left had been damaged due to contact with the ocean floor." In short, the Russian team held that the screws became broken or bent due to contact with the ocean floor, which varies considerably from the official announcement by the South Korean team.

http://english.hani.co.kr/arti/english_edition/e_northkorea/432230.html Russian Navy Expert Team’s analysis on the Cheonan incident :The following are the conclusions reached based on the analysis of and experiments on the materials given to the team of Russian experts.

The following was concluded from our examination: Before the sinking, the bottom of the Cheonan ship touched the shallow ocean floor, and all wing blades of its right screw (propeller) and two wing blades of its left screw (propeller) were damaged, and the damaged propellers were scratched so baddly that they became shiny and wide areas of the screws were scratched by friction.

- Remnant fishing nets were found entangled around the right screw axle of the damaged ship. This contradicts the ROK’s claim that there were no fishing zones in the area of the ship’s voyage.

The Russian experts’ conclusions are the following.

1. It is confirmed that the cause of the sinking of the Cheonan is due to an explosion outside the ship and in the water. (* The Hankyoreh Korean version specifically names the probable cause of explosion due to the 'underwater mines' that have probably been installed by the ROK and U.S. as a part of deterrence practice against NK for decades in the past)

2. Before the sinking, the Cheonan ship touched the ocean floor on the right, a fishing net was entangled in the right propeller and the right line of the axle, which damaged the propeller wings.

Due to the entanglement of the fishing net with the right propeller and axle line, the Cheonan ship must have experienced restrictions in its speed and maneuvers.

The Cheonan ship was traveling in a shallow area close to the coast and was entangled with the fishing net, and while it was moving to deeper water, the bottom of the ship might have touched an antenna of an ocean mine, which ignited the explosion of the mine.

Another possibility is that the ship was traveling with its malfunctioning navigation system and with a restricted maneuvering capability, it might have been exploded by a ROK’s torpedo.

3. The torpedo part that ROK presented seems to be an electronic torpedo with a radius of 533mm. However, we do not conclude that this particular torpedo was launched to and impacted on the Cheonan ship.

: The Russian investigation team has proposed that the primary problem was damage to the ship’s propeller prior to the explosion

The Russian team that investigated the cause of the Cheonan's sinking concluded that a “complex combination of factors” were responsible. The report on its investigation findings essentially states that the primary problem arose while the Cheonan was sailing through deep waters, and that the underwater explosion was a secondary factor resulting from a mine.

The Russian team agreed with the South Korean joint civilian-military investigation team’s conclusion that the sinking resulting from a non-contact underwater explosion. However, in light of the state of damage to propeller screws on the Cheonan, the Russian team surmised that they had likely come into contact with the ocean floor before the explosion took place.

“Prior to the sinking, the Cheonan came into contact with the ocean floor on the right side, and there is a very strong likelihood that the propeller wings were damaged as a net became entangled with the right propeller and shaft,” the team stated.

http://english.hani.co.kr/arti/english_edition/e_editorial/432234.htm [Editorial] A thorough reinvestigation into the sinking of the Cheonan

Since the sinking of the Cheonan, anachronistic division and conflict between two camps has been taking place on the Korean Peninsula and in Northeast Asia. A thorough reinvestigation will be very helpful in bringing this futile phase of conflict to an end.

Posted by NO Base Stories of Korea at 7:30 AM