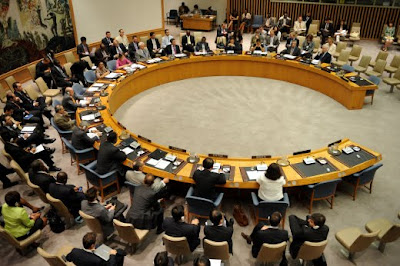 Hankyoreh
UN condemns attack on Cheonan
: The Presidential Statement allows for a “double interpretation,” and does not blame or place consequences upon N.Korea
July 10, 2010

The President’s Statement adopted and circulated Friday (local time) by the United Nations Security Council on the Cheonan sinking was the product of an ongoing diplomatic compromise. It opened up the possibility for a “double interpretation,” allowing South Korea, the U.S., and Japan, which claim the sinking resulted from a “North Korean torpedo attack,” and North Korea, China, and Russia, which reject that explanation, to interpret it in whatever way they like. In summary, the statement ruled that the sinking resulted from an “attack,” but did not specify who carried out that attack. So the international community’s discussion on the sinking comes to an end with the adoption of this statement, but with no point of contact found between the two positions, it has become impossible to conclude the debate once and for all. “Competing interpretations” appear to be inevitable in the days ahead as well. This is why it is difficult to make any clear predictions on how the political situation on the Korean Peninsula will unfold, including whether the six-party talks will resume sooner rather than later.

An official with South Korea’s Ministry of Foreign Affairs and Trade said Friday that the statement “included all the intended key elements” and that it was a “satisfactory outcome.” They have claimed a “diplomatic success” for four reasons. First, Paragraphs 2-7 of the statement twice emphasizes that the sinking of the Cheonan was caused by an “attack,” and “deplores” and “condemns” this. Second, Item 5 expresses “deep concern” in view of the findings of the joint civilian-military investigation team stating that responsibility for the Cheonan’s sinking lies with North Korea. Third, Paragraph 8 emphasized the importance of preventing such attacks and acts of hostility. Fourth, paragraph 4 urges appropriate and peaceful measures against those responsible for the incident.

However, other interpretations differing from that of the South Korean government are also possible. A case in point is Paragraph 9, which states that the UNSC takes into account North Korea’s response that it had nothing to do with the incident, as well as the response from other concerned countries. In essence, the claims of North Korea and South were presented side by side, albeit with differences in the amount of space allotted to them, which actually leaves North Korea with the margin to use this as an “acquittal.” This is why observers are calling the statement, as Inje University professor Kim Yeon-chul put it, “a failure of South Korean diplomatic efforts that had the goal of ‘coaxing out a unified response from the international community’ by referring the matter to the UNSC.”

As a result, it has also become unclear whether the conclusion of UNSC discussions will lead to an early resolution of the Cheonan situation and a resumption of the six-party talks. The possibility exists that the controversy over the cause of the sinking will reignite among the concerned countries, including North Korea and South Korea.

However, attention must also be paid to the fact that the President’s Statement did not provide any basis for additional measures against North Korea. Indeed, even though the statement urged “appropriate and peaceful measures” against those responsible, it did not specify who should carry out such measures. In Paragraph 10, it also encouraged “the settlement of outstanding issues on the Korean peninsula by peaceful means” in order to resume direct dialogue and discussions through appropriate channels as soon as possible, which in some sense could be seen as a curb on additional hard-line measures against North Korea from South Korea, the U.S., or Japan. This gives some indication of traces of “Chinese diplomacy,” as well as strategic adjustments by the U.S. and China to prevent the political situation on the Korean Peninsula from deteriorating further.

Analysts are predicting that the future course of the political situation on the Peninsula will become clearer with the South Korea-U.S. “2 plus 2” summit between foreign and defense ministers in Seoul on July 21 and the ASEAN Regional Forum to take place in the Vietnamese capital of Hanoi on July 21 to 23. The general view among experts is that the keys to whether the situation will stabilize in the near future and dialogue will begin again are the strategic coordination by the U.S. and China and the question of whether North Korea and South Korea refrain from additional aggression.

Chronology of events related to sinking of S. Korean warship

UNSC statement-text
Posted by NO Base Stories of Korea at 11:30 PM