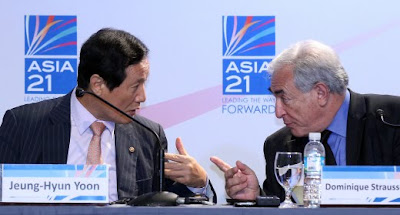 “It is almost like taking medicine for a sickness you don’t even have.”

“Sometimes you also have to take medicine for prevention.”

On Tuesday, the second day of an “Asia Conference” hosted by the International Monetary Fund and the Ministry of Strategy and Finance in Daejeon, opinions were divided between the IMF and participants over financial regulations that have been stepped up in the wake of the global financial crisis. The IMF actively defended the stronger regulations, but Asian countries, which had no major problems with their banks during the latest financial crisis, showed a tepid response. This represents a 180-degree turn from the Asian foreign exchange crisis over ten years ago, when the IMF “forced” Asian countries to relax their regulations.

CLICK THE LINK FOR MORE READING
Posted by NO Base Stories of Korea at 11:03 PM