Text Fwd: US to slap new sanctions on NK 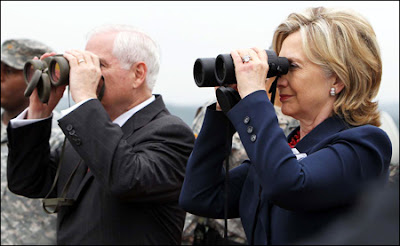 U.S. Secretary of State Hillary Clinton Wednesday announced a set of country-specific sanctions on North Korea to prevent its illicit activities that would ultimately help the proliferation of the nuclear program.

“We will implement new country-specific sanctions aimed at North Korea’s sale and procurement of arms and related material and the procurement of luxury goods and other illicit activities,” she said at a press conference held after the “2+2” meeting in Seoul.

The tough measures came at a time when North Korea was striving to turn the tide by expressing its willingness to return to the six-party talks.

During the press conference, Clinton and Yu Myung-hwan, minister of foreign affairs and trade, made it clear that time is not ripe for dialogue.

Also joining the news conference after the high-level meeting were Kim Tae-young, minister of national defense, and Robert Gates, U.S. secretary of defense.

Clinton said the intensified effort includes, among others, additional state and treasury designations for entities and individuals supporting proliferation subjecting them to an asset freeze.

The top South Korean and U.S. officials in foreign affairs and defense agreed to maintain a “robust combined defense posture” to deter threats from North Korea.

In a joint statement released after the meeting, the two sides urged North Korea to take responsibility for the sinking of the warship Cheonan that killed 46 sailors in March, warning of serious consequences that the North will face if it commits another provocation.

The key officials met at the meeting to discuss ways to upgrade the alliance, marking the 60th anniversary of the outbreak of the Korean War.

They pledged to work together more closely and comprehensively at regional and global levels, indicating South Korea’s increasing role in tackling global challenges.

In the statement, they agreed to complete a new vision for the ROK-U.S. alliance, dubbed Strategic Alliance 2015, by this year’s Security Consultative Meeting.

The two sides also exchanged views about global challenges such as terrorism, proliferation of weapons of mass destruction, the financial crisis and transitional crimes.

Ahead of the talks, Clinton, Gates and their South Korean counterparts visited the Demilitarized Zone (DMZ) on the border with North Korea.

Prior to releasing the joint statement, the two countries held a two-hour meeting at the Ministry of Foreign Affairs and Trade. Several high-profile officials from the U.S. State and Defense Departments participated in the closed-door meeting.

The “2+2” meeting was the first of its kind to be held in Korea. Previously, the United States held such meetings with Australia and Japan.

Regarding the outcome of the tripartite meeting, a government official said on condition of anonymity that the three sides shared the view that opening dialogue at the moment would be of no help as there has been no change in the North’s positions on the nuclear issue and the Cheonan incident.

* The below comes from the original site