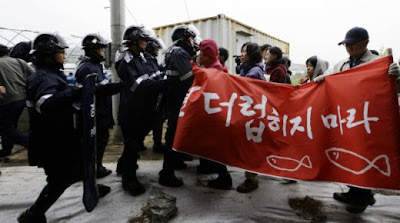 'Farmers of the Paldang Organic Farm are confronted by police officers during a demonstration against the Four Major Rivers Restoration Project, May 11.'

The International Federation of Organic Agriculture Movements (IFOAM) has issued a statement saying that unless the issue surrounding the Paldang Organic Farm is resolved, it will rediscuss its decision to hold next September’s Organic World Congress, currently scheduled to be held in the Paldang area. The Lee Myung-bak administration issued its decision in April to tear down the farm and allocate the land for use in its Four Major Rivers Restoration Project.

IFOAM said it would open a debate this September and submit data refuting claims by the South Korean national and Gyeonggi Provincial governments that organic farming damages water quality.

A private, international organic farming movement with 750 organic farming groups and farmers from 110 nations, IFOAM holds its Organic World Congress every three years, touring the continents. The 2011 congress, to be held at the Paldang Organic Farm as the first to convene in Asia, will include an organic farming expo, debates and workshops on the latest organic farming technologies, among other activities.
Posted by NO Base Stories of Korea at 1:09 AM