-[T]he scale and the timing of the exercise could be adjusted if China makes some concessions. A senior presidential official hinted at a link between UNSC sanctions against the North and the joint South Korea-U.S. exercise....

-A flotilla of the Seventh U.S. Fleet, including the 97,000-ton aircraft carrier USS George Washington, a nuclear-powered submarine and an Aegis destroyer, and the South Korean Navy's destroyers and submarines were to participate in the joint exercise.

China has asked the South Korean government through a diplomatic channel to refrain from a join exercise with the U.S. in the West Sea [Yellow Sea] this month. The anti-submarine drill is planned as a response to North Korea's torpedo attack on the Navy corvette Cheonan.

A government official said the country will not consider canceling or changing the joint exercise plan. "A military exercise in our territorial waters is a matter of our own sovereignty," he said. A diplomatic source said Beijing asked Seoul to refrain from the exercise for fear that it "might destabilize the Korean Peninsula."

The state-controlled Chinese media have been slamming the planned exercise. The Global Times, a sister newspaper of the official People's Daily, in an unusually harshly worded front-page story on Wednesday said Seoul has "delusions" of putting pressure on Beijing through the exercise.

"The U.S. and South Korea are using the UN as an excuse to pressure China over its stance on the sinking," the daily quoted a Chinese academic as saying. In an editorial Tuesday, the same paper said the drill is a clear challenge to China's security. "Considering the growing economic, diplomatic, political and cultural ties the U.S. has with China, the price the U.S. has to pay for its irresponsible decision will be higher than it can envision now. If the U.S. does not pay for this 'adventure' now, it will pay in the future," it added. 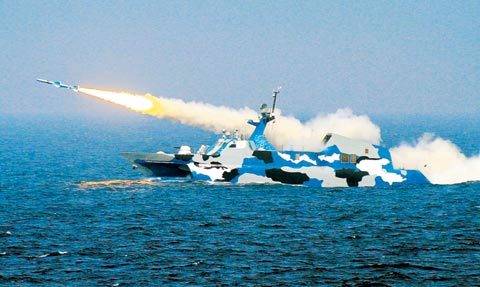 'A Chinese Navy ship fires a missile during a live fire exercise in the East China Sea early this month. /Xinhua-Yonhap'

A South Korean government official said, "Just as China staged a live fire exercise in the East China Sea on June 30, the two allies Korea and the U.S. are staging a drill in our territorial waters. It's a matter of sovereignty that nobody can interfere with. We can't cancel the plan just because China is protesting."

But some officials say the plan may be slightly adjusted depending on what position China takes when the UNSC makes a decision over the Cheonan sinking. China is against any attempts at the UNSC to put the blame on North Korea or describe the sinking as an "attack" in any official statement. If the UNSC fails to come up with a chairman's statement strongly condemning the North, South Korea and the U.S. will consider taking separate action against the North, including financial sanctions. But the scale and the timing of the exercise could be adjusted if China makes some concessions.

A senior presidential official hinted at a link between UNSC sanctions against the North and the joint South Korea-U.S. exercise, although he said that the joint exercise is not to be traded for such sanctions. "We're trying not to irritate China through the exercise," he said.

The drill was originally scheduled for late June and early July. After an inquiry found in late May that the Cheonan had been attacked by the North, the two countries intended to stage a show of force against the North.

A flotilla of the Seventh U.S. Fleet, including the 97,000-ton aircraft carrier USS George Washington, a nuclear-powered submarine and an Aegis destroyer, and the South Korean Navy's destroyers and submarines were to participate in the joint exercise. But the plan was delayed due to Chinese protests and the UNSC's failure to come up with a strong response to the sinking. 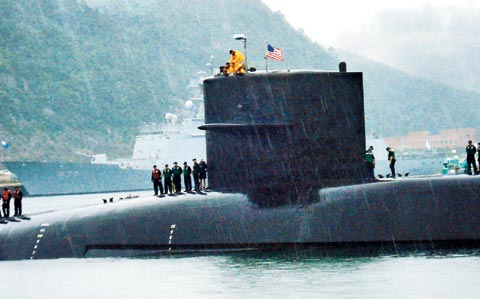