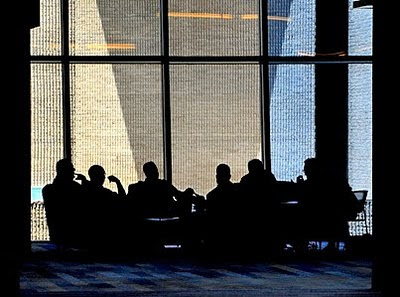 Knowing that many of you won't have time to read the long Washington Post expose on privatizing intelligence and war I thought I'd post a few interesting bits from the series.

In the end the story is not a surprise but the rich details give some insight into how the corporations have taken near total control of foreign policy and are becoming fat rich bastards to boot.

All this reenforces for me the whole notion that America's role under corporate globalization of the world economy will be "security export".

I am reminded of the Crown family from Chicago that have been significant owners of General Dynamics. They were early supporters of Obama's campaign for president and early on did national fundraising for him. They also opened the door to national Jewish community support for him. You could say they have an investment in Obama.

As one line above says, this is becoming a jobs program. And good paying jobs, with huge perks, for those hired. All you have to do to be hired is bury your judgement and your conscience. You have to be willing to advocate and lobby for a continuation of this massive gravy train. This puts you in league with fascist elements who are then using people's greed to help construct a global military machine whose principal purpose is to advance the interests of corporate capital.

I'd love to see the "fiscal conservatives" and Tea Baggers take a crack at this one. Instead of complaining about immigrants getting treatment at the hospital emergency room they ought to be publicly taking on the corruption, waste, fraud, and abuse that is now at unheard of levels.

More than that the conservatives and Tea Baggers should be first in line to question our "liberty and freedom" being lost as we lose our democracy to the forces of denial, secrecy, greed, and imperialism.

All being funded by working class people who won't get anything out of all this except the tax bill and fewer rights.

'434 results for Air and satellite operations


http://space4peace.blogspot.com/2010/07/outsourcing-intelligence-and-war.html
Monday, July 19, 2010
OUTSOURCING INTELLIGENCE AND WAR
Posted by NO Base Stories of Korea at 1:51 AM