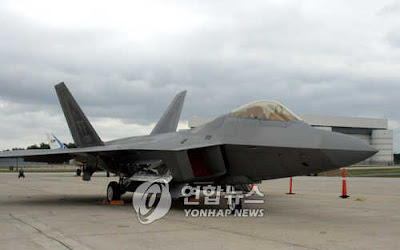 SEOUL, July 18 (Yonhap) -- The United States may dispatch its high-tech F-22 Raptor stealth fighter to the Korean Peninsula for the upcoming joint military exercises with South Korea aimed at sending a warning message to North Korea for its continued provocative acts, a government source said Sunday.

"Chances are high that the F-22 fighter jet will take part in the South Korea-U.S. joint drills to be held in the East Sea within July, in which a U.S. aircraft carrier will also participate," the source said on the condition of anonymity. "The U.S. is considering the F-22's participation in the training."

In response to the March 26 deadly sinking of a South Korean warship caused by a North Korean torpedo attack that left 46 sailors dead, the allies have decided to conduct large-scale naval drills in the eastern waters of South Korea, along with an anti-submarine training in the Yellow Sea.

The exact dates for the exercises and other details will be decided at an unprecedented group meeting of foreign and defense ministers from the two sides in Seoul this week, officials said. The U.S. has already confirmed that it will send the nuclear-powered USS George Washington, which is stationed at the U.S. naval base in Yokosuka, Japan.

Another source also said that the upcoming drills will involve core forces of the U.S. Second Fleet and American troops stationed in Japan.

If the F-22 takes part in the training, it would mark the first time for the jet to be deployed in Korea.

From the base in Okinawa, the F-22, dubbed the "strongest fighter jet in existence," is reportedly capable of striking North Korea's main nuclear facilities in Yongbyon within half an hour after take-off.
Posted by NO Base Stories of Korea at 2:02 AM