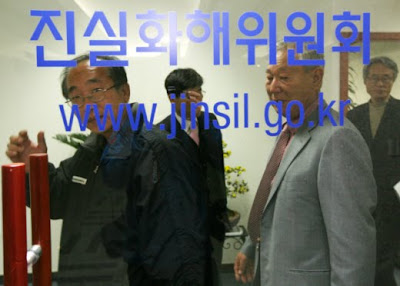 * Image source: Same as the link
'Visitors wait to meet with officials of the Truth and Reconciliation Commission of Korea (TRCK) in Seoul.' 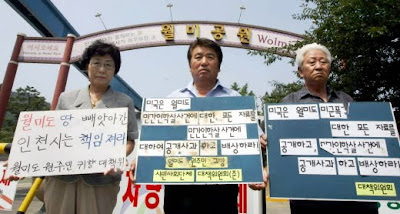 Hankyoreh
Bereaved families continue 2,017-day sit-in on Wolmi Island
: The families remain uncompensated for eviction during the war while a $23M park project is underway
By Kim Min-kyeong
Posted on : Jul.16,2010 12:09 KST

‘The residents of Wolmi Island, who were forced from their home with just the clothes on their back, have been demanding to be allowed to return home since 1952, but have only been told by the government that Wolmi Island was being used as a military facility. Recently, the Defense Ministry and Incheon City government have been trying to pass off responsibility, saying the land was not theirs, and that they were not responsible for the residents being forced out.’

‘A sit-in strike by bereaved families demanding an investigation and compensation for their losses, which began on Oct. 7, 2004, continued for its 2,017th day Thursday. The bereaved family members continue the strike two at a time in a building constructed using wood planks taken from the homes removed from Wolmi Island. Six of the 30 people that began the strike have since died, while those that survive are frequently ill.’ 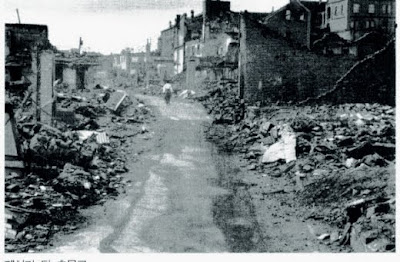 * Image source: same as the link
'Downtown Seoul after being destroyed by a U.S.bombing operation during the Korean War in 1950.'

'How bad was the damage from the Yongsan bombing? According to statistics on Seoul resident casualties during the first three months of the war, drawn up by the government statistics office in 1950, one fourth of the 17,127 deaths were caused by air raids. In particular, of the 2,709 total deaths suffered in the Yongsan district, the direct target of the Yongsan bombing 1,587, or 58.6 percent, were due to bombings.'
Posted by NO Base Stories of Korea at 1:14 AM