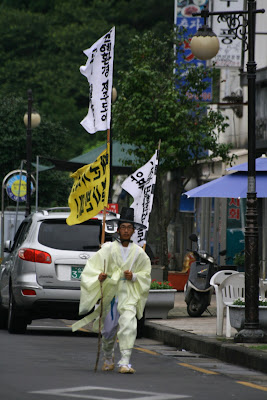 Artist Kim Min-Soo, Gangjeong, has begun his own personal pilgrim march throughout the Jeju Island, days ago. Thanks to his friend, Boreum Doraegi, a photographer, I became to know the news. The photos come from the blog of Boreum Doraegi who accompanied with him his first day for the walk and sleep in the tent on the load.

Beside his main purpose to extend the issue against the naval base throughout the Jeju island, Mr. Kim also plans to get the signs as possible as many a day for the Pan-Island people’s petition for the cancellation of the removal of the designation of the absolute preservation area.

It has been some time that he has told his friends around him that he would make a pilgrim himself, wearing the Korean traditional costume and banners that say, “ No Naval Base in the Nature-Blessed Jeju Island” - as if reminding his ancestors were proud integral scholars and artists.

Go, Min-Soo! Be health and courageous! We are all with you!
Posted by NO Base Stories of Korea at 10:32 AM