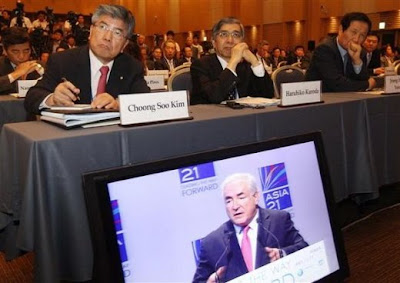 Hankyoreh
IMF admits mistakes in 1997 crisis countermeasures
:The IMF has recently been reaching out to Asian countries as they have become a major group in the world economy
July 13, 2010
By Hwang Bo-yeon

“The conditions demanded by the IMF during the Asian financial crisis were very painful for Asian countries. They may have been more painful than necessary.”

During a conference held in South Korea, the IMF admitted it made mistakes in the rescue program it demanded of South Korea during the financial crisis. It also unleashed a sort of “love offensive” on Asia, which is becoming a major axis of the world economy, saying it wants the fund to become a “second home” for Asia.

CLICK THE ABOVE LINK FOR MORE READING
Posted by NO Base Stories of Korea at 9:44 PM