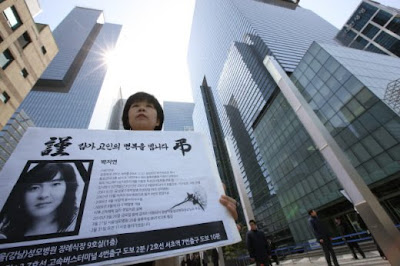 'A civic organization member in support of the human rights of workers in the semiconductor industry holds a signboard during a one-person demonstration mourning the death Park Ji-hyeon, a Samsung Electronics employee who passed away due to complications from leukemia, in front of the Samsung Headquarters in Seoul‘s Seocho neighborhood, April 2.'

A number of people have come forward and claimed that Samsung Electronics has offered large settlements to employees and their families in order to persuade them to drop industrial accident claims. Employees filed the claims after contracting diseases such as leukemia while working in the company’s semiconductor and liquid crystal display (LCD) plants. Surviving family members of employees who have already died from diseases, as well as employees currently suffering from disease and their family members, have claimed that Samsung has offered hundreds of millions of won in settlements in order to persuade them to drop their industrial accident claims and terminate contact with civic organizations.

* Below 'Hot Issue' sites are copied from the same link.