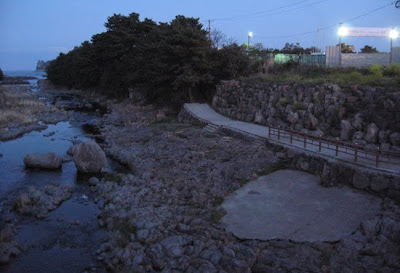 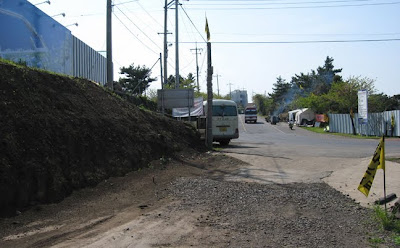 The above photo was taken in the night of April 19, 2010.
It was the day when this site manager heard the news that the result of the 1st review trial that the villagers had cautiously expected to win over the navy, had been postponed, due to the navy’s manipulation.

The ugly makeshift gate of the navy site in the eastern tip of the planned base area has been set up right beside the Gangjeong stream since its raid accompanied by the police into the Gangjeong village on Jan. 18, 2010.

Since then, the villagers have set up the vigil tent right in front of the navy site, holding the rotational twenty-four hours’ vigil (below photo).

One Day before the Lawsuit on the Naval Base Plan.. Could It Be the Turn for the Controversy Settlement?
: ‘Lawsuit on the Confirmation for the Cancellation of the Approval Disposal on the Execution Plan for the Defense/ Military Facilities’ that has been extended for a Year and Three Months Has the 1st Review Trial Judgment on July [15].

Related to the Jeju naval base business, public attention is being gathered on the [coming] result of the 1st review trial Judgment on the ‘lawsuit on the confirmation for the cancellation of the approval disposal on the execution plan for the defense/ military facilities,’ as it will be done on July 15, after a year and three months have passed [since its appeal by the villagers].

The administrative department No. 13 of the Seoul Administrative Court will have the judgment on the lawsuit at 10am on July 15.

The lawsuit is what 449 people including Kang Dong-Kyun, the Gangjeong mayor have appealed to the Seoul administrative court against the Minister of the National Defense on last April 20, 2009. There have been total nine pleadings for about a year, of which the last was the 9th pleading on last May 27, 2010.

Meanwhile, as the agendas on the agreement on the cancellation of the absolute preservation area and environmental impact assessment have been submitted to the Island assembly, there have even been the body struggles among the assembly men, not to mention those between the villagers and policemen. Further, during the process to prevent the construction by the navy and construction-carrying-out companies, big and small physical clashes have occurred and in that process, many villagers including Kang Dong-Kyun, the Gangjeong mayor happened to be indicted and accused [by the navy & police].

The position of the plaintiffs, in other words, the Gangjeong villagers, is that, “In case of the defense/military facility business, the environmental impact assessment should be presented 'before the approval of the practice plan on the defense military facility’ or be requested with the consultation.”

On the contrary, the Minister of the National Defense claims that, “Since the presentation period of the report on the environmental impact assessment is before the ‘approval of the basic layout,’ it is nothing to do with the period of the approval on the practice plan.”

The Minister of National Defense confronted against them, saying, “In the 2nd & 3rd supplementary reports for the prior environmental review, the points on the location validity or the substitutes have been faithfully studied.”

The Minister of National Defense claims, “There are no problems since 1. the absolute preservation area is not the target area of the execution plan; and the absolute preservation area can be canceled before the setting-up of harbor & bay construction (* which is the first part of the construction) or if there was the permission of the action by the City of Seogwipo.”

The position of the plaintiffs is that the approval disposal of the execution plan on the defense/military facilities that was based on the vote of the temporary general meeting of the Gangjeong village on last April 26, 2007, is null and void because the vote decision had been violating the village rule and the opinion of the villagers who opposed against the naval base plan had not been enough reflected.

' “It was revealed [later] that there had been the contact in the closed room between the governor Kim Tae-Hwan and ex-mayor whom we discharged. [To say again], there was an operation behind the door. The ex-mayor had brought the acquainted to his side and won the fishing community over, by saying it to give it 100million~150million won [* about $ 86,000 ~$130,000]."

It was a situation that most village people were betrayed behind their backs. Since then, in the village people’s vote on August [20], despite the interruption of the navy and Jeju Island, about 700 people joined the vote and opposition ballots [against the naval base] were overwhelmingly 680.'

* The Gangjeong villagers had their own vote on August 20, 2010. In the vote, among total 1025 electorates in the Gangjeong village, 725 voted, opposition votes were 680 that was about 94% of the total voters. You can see the very scene including that of the villagers' great excitement upon the vote result at the time in the beginning part of the first video HERE. )

However, the Ministry of National Defense retorts that, “In the approval disposal of the defense/ military facility business, the collection of the villagers’ opinion is not the lawful element.”

＃ Different thoughts on the lawsuit result… [the issue of] the conflict solution will still remain as a task.

Since the lawsuit this time could become the new turning point in the naval base controversy for last years, it has gathered people’s attention.

Because, if the Gangjeong villagers win the lawsuit, it means the court acknowledges the procedural problems, [during the navy's unilateral drive process for the base plan], that they have claimed so far therefore it could be the chance for the start of new discussion related to the naval base [issue], such as on the reconsideration of location, the Gangjeong villagers expect the winning lawsuit.

The navy is paying acute attention to the judgment, in the sense that they could have the cause to [re]start the construction that has been postponed, if it wins [the lawsuit over the villagers]

(* In reality, the navy was hideously driving the construction)

Specially, it is noticed which way the new Woo Geun-Min’s 5th civilian-elected Jeju island government would take, that has expressed its position that, “There should be no enforcement of construction without the conflict solution.”

However, seeing that the naval base controversy has originated from the absence of communications among the administrative institute, military & villagers and [villagers'] loss of trust on the navy because of them, it looks one has to more watch how the court decision will contribute to the ‘conflict solution.’
Posted by NO Base Stories of Korea at 2:19 AM