Text Fwd: Will Korea become venue for show of force? 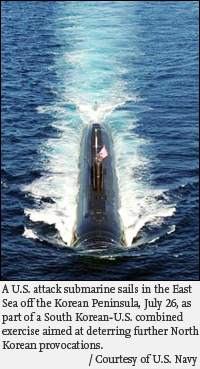 This week’s major naval and air exercises by South Korea and the United States in the eastern waters of the Korean Peninsula demonstrated their powerful deterrent capabilities against North Korean provocation, experts say, but it also reveals the possibility of the peninsula becoming a stage for power games between the world’s two largest economies ― the United States and China ― at any time.

The four-day “Invincible Spirit” exercise ended Wednesday after the two countries employed massive air and naval capabilities to send a “message” to North Korea, which has been blamed for the sinking of one of South Korea’s warships in western waters March 26.

“This kind of exercise is intended to demonstrate to North Korea the risks of its future provocations, given U.S.-ROK strengths,” Bruce Bennett, a senior defense analyst at the RAND Corporation, a private U.S. defense think tank, told The Korea Times. “It also allows the ROK and U.S. forces to exercise together in waters adjoining Korea, and thereby enhance their cooperation and reduce any defensive gaps that might exist.

“While the North Korean leadership will not like such an exercise, it will also know that if it escalates its provocations, the United States can fairly quickly send 3 to 5 times as large a naval force into Korean waters and pose a substantial threat to North Korea,” he said.

One focus of the exercise has been anti-submarine training, which follows the sinking of the Cheonan warship believed to have been torpedoed by a North Korean submarine. Forty-six sailors were killed from the attack.

To demonstrate its firm commitment to the defense of South Korea, the U.S. Air Force temporarily dispatched F-22 fighter jets to the peninsula for the first time for training missions.

“The F-22 Raptor came to us because it is here in the Pacific region right now at Kadena Air Base in Okinawa, Japan, on what we call a theater security package to demonstrate to our alliance partners, both Korea and Japan, and all of Northeast Asia, our commitment to peace and stability in this region of the world,” Lt. Gen. Jeffrey Remington, commander of the U.S. 7th Air Force, told the press July 26 at Osan Air Base, about 65 kilometers south of Seoul.

Approximately 8,000 troops participated in the exercise, in addition to 200 aircraft, and 20 alliance surface warships and submarines.

Follow-up exercises, including an anti-submarine drill in the West Sea, are scheduled to begin in September. 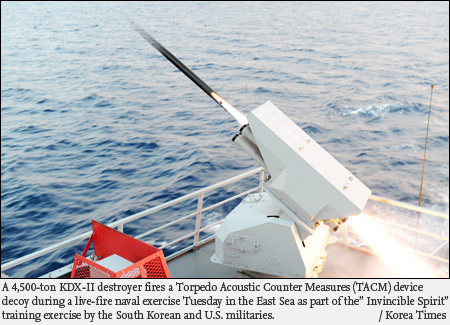 Yang Moo-jin, a professor of the University of North Korean Studies in Seoul, expressed concern that the high-profile military exercise could stoke tensions on the peninsula unnecessarily and eventually lead to North Korea’s nuclear deterrence.

“Under the armistice system, we’re inevitably vulnerable to any volatile situation, and there have been many cases of conflicts (since the signing of the armistice agreement in 1953). That’s why we should come up with polices toward the North in a careful and measured way for the long-term and in a consistent manner,” Yang said in a phone interview.

In the face of the show of force by South Korea and the United States, North Korea vowed earlier this week that it would further bolster its nuclear deterrence.

Yang expected the North would not conduct any direct response to the South Korea-U.S. war games due mainly to pressure from China, its closest ally.

The North is also limited to military responses because of its domestic politics and an instable power succession process, said the professor.

“But it’s possible that the North could attempt to ratchet up tension by test-firing short-range missiles or coastal artillery both in the eastern and western waters, or maneuvering its patrol ships near the Northern Limit Line (NLL),” he noted.

Furthermore, the communist state would try to bolster its nuclear deterrence by carrying out a third underground atomic bomb test, developing technology to mount a nuclear warhead on intercontinental ballistic missiles, and test-launching the missiles.

In the worst-case scenario, Pyongyang will try to produce uranium bombs through its claimed highly enriched uranium (HEU) program or hydrogen bombs through nuclear fusion.

In May, the North claimed its scientists had carried out a nuclear fusion reaction that could lead to a limitless supply of clean energy. Observers see such nuclear fusion could also be used to make hydrogen bombs.

In September last year, Pyongyang already argued that it was in the final stages of experimental uranium enrichment, another way of making nuclear bombs.

Six-party talks aimed at dismantling North Korea’s nuclear programs have been stalled since December 2008. The North announced in April last year that it was quitting the multinational denuclearization forum in protest of United Nations sanctions imposed after the North’s long-range missile test in the same month.

The United States announced earlier this month it would expand and strengthen sanctions against the North. The plan was announced by Secretary of State Hillary Clinton when she visited Seoul for the “2+2” talks with Defense Secretary Robert Gates and South Korean counterparts ― Foreign Minister Yu Myung-hwan and Defense Minister Kim Tae-young.

New sanctions would target North Korea’s criminal enterprises, such as trafficking in counterfeit currency and cigarettes, as well as money laundering and drug smuggling, according to diplomats in Seoul.

Clinton stressed a new round of sanctions would target Pyongyang’s sale and purchase of arms and import of luxury goods, and would help prevent nuclear proliferation.

“It is unclear if the decision to announce new U.S. sanctions now is a direct short-term response to the unsatisfactory U.N. action against the Cheonan attack or the culmination of a longer-term effort to add another facet to the strategic patience policy,” said Bruce Klingner, a senior research fellow for Northeast Asia at the Heritage Foundation’s Asian Studies Center.

“If the envisioned sanctions program includes a wide-ranging and vigorous enforcement of U.N. resolutions and international law, it could provide a more effective means to bring pressure on North Korea,” he noted.

The sanctions must target a more extensive listing of North Korean entities but also other foreign countries, businesses and banks that are violating U.N. Resolution 1874 imposed on the North in the aftermath of its second underground nuclear test in May last year, he added.
Pundits agree that the most successful round of sanctions against North Korea occurred in 2005, when the U.S. Treasury Department designated the Macao-based Banco Delta Asia as a money-laun-derer of North Korean illicit assets. In the face of financial difficulties, North Korea returned to the six-party denuclearization talks, but it paid a steep price as $25 million was held back by the bank.